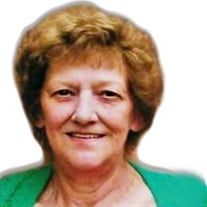 Darlene Ewers, 77, of Mason City passed away peacefully, Friday, June 4, 2021 at MercyOne Hospice of North Iowa in Mason City after a courageous battle with COPD and cancer.

Funeral Services will be held 10:00 a.m. Wednesday, June 9, 2021 at Hogan-Bremer-Moore Colonial Chapel, 126 3rd St. NE, Mason City, IA 50401 with Chaplain Art Zewert officiating. She will be laid to rest beside her husband, Dexter, at Elmwood-St. Joseph Cemetery in Mason City. The Celebration of her life will continue at the Moose Lodge following the burial.

Darlene Lucille Harms was born October 28, 1943 in rural Klemme, IA the fifth child of ten to Taus and Cecilia (Heginger) Harms. She graduated from Meservey, IA. Darlene married Steve Hartema and the couple had a daughter, Amelia; the couple later divorced. Later Darlene met Dexter Ewers and the couple was married on September 3, 1986, and two families became one.

For many years Darlene worked at Mode O’Day and later in food service including, head of hot foods at The Royal Fork, The City Lounge, and later the Saddle Company, finishing her career at Bill’s Barbeque. Dar took great pride in caring for others. She loved to fish, together with Dexter the couple would camp in Northern Canada each fall and spring. Darlene cared for her garden and often shared her harvest of tomatoes, peppers, beans and cucumbers with her family. She enjoyed time spent watching the wildlife out her back door, whether it was birds, rabbits, or her two ducks that returned each year.

Preceding her in death are her husband, Dexter; her parents, Taus and Cecilia; and siblings, Taus Jr., Arlene Weimann, Donnie and Bennie Harms.