This news story was published on November 15, 2020.
Advertise on NIT • Subscribe to NIT 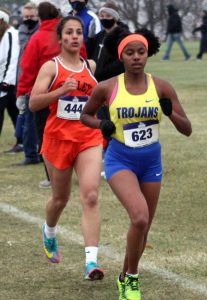 Bertry earned her second-place finish in a time of 18 minutes, 33 seconds. Cowley College’s Lubna Suied was the NJCAA Division II individual champion in 18:33.

The second-place finish by Bertry was the highest by a NIACC women’s runner since Hannah Palmeter placed third at the NJCAA Division I meet in 2014. It was the second runner-up finish at the national meet for the NIACC women as Anna Buenneke earned runner-up honors at the 2011 meet.

The NIACC women placed 10th in the team standings with 276 points. Cowley College was the team champion with 68 points.

Heartland CC was second with 71 points and Hawkeye CC was third with 103 points.

The 10th place finish by the Lady Trojans is the highest in school history. The previous best finish was a pair of 13th place finishes at the NJCAA Division I meets in 2013 and 2014.

“There were some personal bests and some season bests,” Vais said. “This is the first time for the women to be in the top 10. So there was a lot of history made (Saturday) on both sides. I’m proud to be their coach.”