CEDAR RAPIDS – A man who distributed marijuana and possessed a firearm was sentenced to six years in federal prison.

In a plea agreement, Collins admitted that on October 29, 2017, he was an unlawful user of marijuana, and that he possessed a loaded 9mm handgun. Collins also admitted he possessed eleven individual bags of marijuana, totaling 26 grams. Collins admitted he intended to distribute the marijuana to other individuals. Law enforcement discovered the marijuana and handgun when they stopped a car in which Collins was a passenger. During the traffic stop, Collins threw the gun onto the driver’s lap and instructed her to hide it. Police later recovered the gun in the center console of the car and learned that it had previously been reported stolen.

Collins was sentenced in Cedar Rapids by Chief United States District Court Judge Leonard T. Strand. Collins was sentenced to 72 months’ imprisonment. He must also serve a three-year term of supervised release after the prison term. There is no parole in the federal system.

Collins is being held in the United States Marshal’s custody until he can be transported to a federal prison.

The case was prosecuted by Assistant United States Attorney Lisa C. Williams and was investigated by a Federal Task Force composed of the Waterloo Police Department, Federal Bureau of Investigation, and Bureau of Alcohol, Tobacco, and Firearms, assisted by the Black Hawk County Sheriff’s Office and the Cedar Falls Police Department. 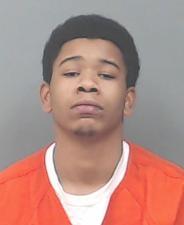 One Response to Armed Waterloo marijuana dealer sent to prison