This news story was published on February 15, 2018.
Advertise on NIT • Subscribe to NIT 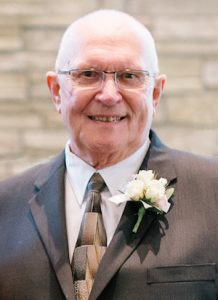 Visitation will be at Hauser Funeral Home from 2:00 to 4:00 p.m. Saturday, February 17, 2018 and will continue one hour before the service at the church on Sunday.

Linus was united in marriage to Sandra Nelson on July 23, 1960 at Cross Evangelical Lutheran Church in Charles City. This union was blessed with four daughters: Kimberly, Kelly, Kathy and Konnie. He was a member of Messiah Lutheran Church for 45 years.

Linus’s family was the joy of his life. When the girls were young, they enjoyed going to Clear Lake most weekends for swimming and picnics. Yearly family trips were to Osage Beach in the Ozarks. He loved attending his grandchildren’s sporting events and grandparents day at their schools. Linus and Sandy enjoyed traveling to British Columbia, Hawaii, Europe, various cruises and Disney World.

He was preceded in death by his parents; brother, Edwin Schrage; parents-in-law, Stanley and Leona Nelson; and brother-in-law, Jack Nelson.