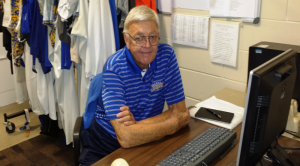 Vance Baird passed away while working at the NIACC Women’s Basketball Challenge.

To people involved with NIACC and the athletic department, no last name was necessary in the above second sentence.

Vance was one of the rare people on the planet where just one name is needed.

Even Michael (Jordan or Jackson) needs clarification in some circles.

Not Vance, who was inducted into the NIACC athletics hall of fame in 2014, in this small but extremely special part of the world.

I made a few phone calls after his passing Friday night to people in the NIACC athletic family and simply said “Vance passed away tonight at the basketball game” and silence and shock was heard on the other end of my phone.

I texted my son Aaron, who grew up around NIACC athletics and ran cross country for the Trojans in 2015-16, and his immediate response was “no way …. that has to be tough for everyone.”

See what I mean?

Vance did it all at NIACC since coming to the school in the early 1970s.

Laundry, ticket taker, concessions, etc. You get the picture.

NIACC supporter – put a big blue and gold star inside that box.

“The biggest thing with Vance is that he was loyal and dependable,” former NIACC athletic director Jerry Dunbar was quoted as saying about Vance in 2014.

The hot dogs at the NIACC concession stands over the years even took on a name of their own and were known as “Vance dogs”.

I don’t think he ever really cared for that because he didn’t like the attention being on him.

Nobody worked harder than Vance.

His last day on this earth had him working at a place he dearly loved and where he was dearly loved.

I’ll never forget seeing him walking from his car up to the gym doors carrying four pizzas for the concession stand and women’s coach Todd Ciochetto meeting him to offer his help.

Vance passed away just before halftime of NIACC’s game against Rock Valley College on Friday.

The game continued without interruption and that’s what he would have wanted. He never wanted anyone to make a fuss over him.

While it was shocking and sad to witness Friday night’s events, it was also extremely special to see the NIACC family working together to take care of one of their own.

Athletic director Dan Mason immediately took the lead and began taking care of the details during this tough time. Numerous others also stepped up to lend a hand. And that’s what families do.

A couple people told me Friday night that they asked Vance if he needed to go home.
He, of course, wanted to stay.

In a way, Vance was home and was where he wanted to be as he was surrounded by his NIACC family.

“The thing that stands out the most to me is that NIACC is a family,” Baird said when interviewed for a story on him being inducted into the 2014 NIACC athletics hall of fame. “It really is. Once you are part of the family, everybody keeps you involved and wants to know what and how you are doing.”

So everyone that comes to the basketball games the rest of this weekend and forever forward, come to our concession stand and order a Vance dog.

Vance, you are already missed.