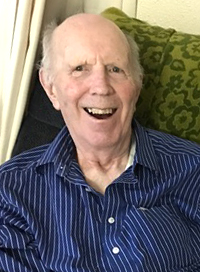 Lyle A. Sprout, 86, of Charles City, passed away, Sunday, April 30, 2017 at the 9th Street Chautauqua Guest Home in Charles City with his family by his side.

A funeral service for Lyle Sprout will be held 10:30 a.m. Monday, May 8, 2017 at Saint John Evangelical Lutheran Church in Charles City with Pastor Bill Odermann officiating. Burial will be at South Walnut Cemetery of Graettinger, Iowa at 3:30 p.m. Monday afternoon.

Visitation will be at Hauser Funeral Home in Charles City Sunday, May 7, 2017 from 2:00 to 4:00 p.m. and will continue one hour prior to the funeral service at the church on Monday.

Lyle Alan Sprout, the son of LeRoy and Edith (Thomson) Sprout, was born August 25, 1930 in Rodman, Iowa. He attended rural schools in Palo Alto County, graduated from Cylinder Consolidated High School in 1949 and continued his education for one year at Iowa State University before returning home to help farm. Lyle served his country in the U.S. Army from 1952-1954 while stationed in Italy during the Korean Conflict. After his honorable discharge, he continued to further his education by receiving a Bachelor of Science Degree from Morningside, a Master’s Degree from the University of Colorado and a Specialist’s Degree from the University of South Dakota.

Lyle loved his family very much and was their big “protector.” He adored his grandchildren and enjoyed attending their events. Lyle was a gentleman in everything he accomplished throughout his life and his family will hold his motto in their hearts forever, “Keep smiling!”

He was preceded in death by his parents; sister, Dorothy Place; and two brothers: Robert Sprout and Blaine Sprout.