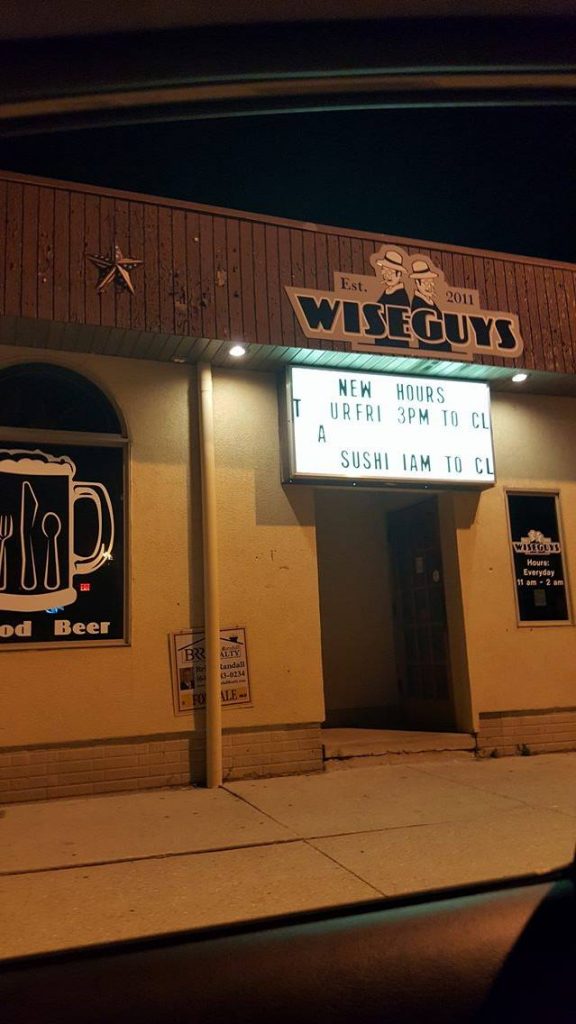 MASON CITY – A downtown restaurant and bar that opened just this year – Wise Guys – appears to have closed.

“Hey fellas, is Wise Guys open?” they were asked.

The “open” signs on the building were not lit Thursday just after noon. In the latest hours the establishment had announced, Wise Guys would be open Thursday through Sunday.

Back in January of this year, Wise Guys announced it would open at 125 1st Street SE.

“Well Folks it’s OFFICIAL !!!!!” they announced via social media.  “Thanks to all of our loyal customers the last 5 years Wise Guys will be moving to a larger location & be serving FOOD !!!”

On September 19, Wise Guys owner Jason Wise announced via social media “With tears in our eyes and an ache in our hearts we would like to announce that Wise Guys has closed.  We would like to thank all our loyal customers, past and present employees and all others that helped us over the last 6 1/2 years.  As some of you know our family has experienced some issues in the last few months and we feel our efforts need to focused in that direction at this time.  Once again thanks for the memories. We will see you all soon.”

A few days prior, Mr. Wise would not confirm to NIT that he was closing, when asked about rumors that the bar would close permanently.

The building underwent what appeared to be extensive remodeling before it was opened this winter.