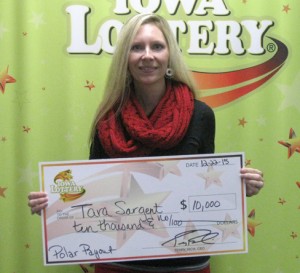 EMMETSBURG, IOWA – A northern Iowa woman’s recent string of lottery luck started with receiving a scratch ticket as a holiday gift, and ended with a big prize two days later.

Tara Sargent of Emmetsburg said she received several “Polar Payout” scratch tickets Saturday as a holiday gift from her Mom. Those tickets won a total $38 and she put the winnings toward the purchase of more Polar Payout tickets Sunday at Dyno’s, 2401 Main St. in Emmetsburg.

The 38-year-old, who rarely plays the lottery, said her winning streak continued and she redeemed more winning Polar Payout tickets Monday during her lunch break, again at her local Dyno’s. She also redeemed more winning tickets after work Monday at Dyno’s for another Polar Payout ticket, and that ticket ended up winning the fifth of 11 top prizes of $10,000 available in the game.

“I just kind of wanted it to be over with because if I win big, great, which it isn’t going to happen in my mind,” Sargent told lottery employees Tuesday as she claimed her prize at the lottery’s regional office in Storm Lake. “I started scratching and the top one was a star and I thought, ‘I won another five bucks – this is never going to end.’ And I kept scratching and I saw the $10,000 and it was kind of a moment where I was like, ‘Wait a minute. Do I have to have three matching stars or is this like the winning ticket?'”

When a store clerk verified the winning ticket, Sargent said she started to celebrate inside Dyno’s.

“I was all excited and jumping up and down, it was pretty exciting,” she said.

Sargent said she shared her good news with her family, including her mother who started her lucky streak by giving her a winning scratch ticket as a holiday gift.

“She said next time she gives lottery tickets for a gift she’s going to make a deal that we have to give her half of any winnings,” Sargent said. “Although technically it wasn’t the ticket that she bought, but if it weren’t for her giving it to me, I would’ve never bought them.”

Sargent said she’s still finalizing a plan for what her lottery winnings will be used for, which might include a future charitable donation.