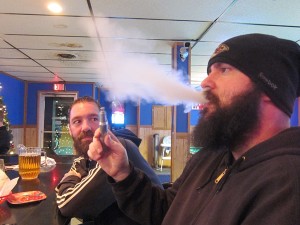 Rick Pierce of Mason City takes a healthy puff from his electronic cigarette in 2012 while enjoying a beverage at Burke’s Bar in Mason City.

DES MOINES – Iowa’s Attorney General confirmed what many already knew: The e-cigarette is much safer than the common, combustible cigarette known to cause cancer.

In a recent statement, Attorney General Tom Miller released a statement of “key facts” on the relatively new product, hoping to clarify his position for lawmakers before the next legislative session begins next month.

Miller blamed the “many deadly toxins” in cigarettes released during combustion or “lighting up”. The Cerro Gordo county health department is offering programs currently to help people break their addictions to cigarettes, in the hope of saving lives.

Miller explains that a pen of experts estimates that the e-cigarette is 95% less harmful than a regular cigarette. He says that despite an effort by many to vilify e-cigarettes, paint the makers of those products as “evil” and then regulate them as severely as regular cigarettes, this view is “incorrect”. He says some of these “misleading” attempts are simply an effort to protect kids but is a failed strategy.