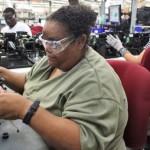 More people are working in Iowa than ever before

DES MOINES – There are more people working in Iowa than ever before, according to statistics released by Iowa Workforce Development.

“Iowa’s job market continues to steadily pick up pace,” said Teresa Wahlert, director of Iowa Workforce Development. “The state’s labor force is currently at an all-time high of 1,711,600, and the total number of working Iowans is 34,800 higher than one year ago.”

The total number of working Iowans reached a current-year peak of 1,634,800 in October. This figure is 5,100 higher than September and 34,800 higher than one year ago.

Iowa nonfarm employment shed a slight 200 jobs in October, lowering the total number of jobs to 1,556,900. This month’s drop is the first since March, and only the third decline in 2014. The larger job losses in October occurred in leisure and hospitality and in government, where weaker-than-expected seasonal hiring was reflected in local and state government. Despite the loss this month, government remains up 5,800 jobs annually due primarily to a surge in local government education hiring.

Trade and transportation added the most jobs this month (+2,700) led by hiring in retail (+1,800) and wholesale trade (+800). October is typically the month when this super sector begins to hire seasonal workers to prepare for the holiday shopping season. The education and health services sector also experienced large gains this month (+2,600). Education in particular had a larger-than-expected seasonal increase, and has now added jobs in four consecutive months. Construction continued to gain employment (+1,600), and has now added 6,700 jobs since March. Alternatively, losses this month were led by leisure and hospitality (-3,200), and concentrated in accommodations and food services. Other monthly losses were small and included manufacturing (-600), other services (-500), and finance (-200).

Since last October, Iowa has added 15,400 jobs (+1.0 percent). Construction has prospered throughout the year, and now leads all sectors in jobs added (+4,600) and by percentage growth (+6.7 percent). The education and health services sector has also steadily trended up throughout the year (+3,700), and has experienced even growth in both private education and health care. Trade and transportation has advanced (+3,100) due to unexpected gains in wholesale trade. On the other hand, leisure and hospitality has now shed jobs annually (-3,100) due to large declines in two consecutive months. Manufacturing is also down annually (-2,800) as the result of cutbacks in both durable and nondurable goods factories. The information services sector continues to contract, and is down 600 jobs from one year ago.