Michael Roy Jones, age 40, was arrested on a Federal Arrest Warrant by Mason City Police Department. The charge was for Sexual Exploitation of a Minor and Possession of child pornography, jailers in the Cerro Gordo County Jail told NIT. He was waiting transfer by the US Marshals and was taken away Saturday.

A long investigation by police led to Jones’ arrest on sex abuse charges for acts he allegedly committed against a child relative.

According to a spokesman for the Mason City Police Department, police received a report on January 27, 2014 of suspected sexual abuse involving Jones. Following months of investigation, Jones was arrested on September 12, 2014 on two counts of C felony third degree sexual abuse and later a charge of incest. He is accused of performing a sex act against the will of a juvenile relative at his residence in the 900 block of South Virginia Avenue in Mason City. 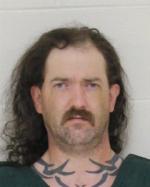