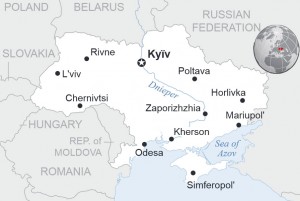 UN – While there have been several steps recently to help de-escalate tensions in Ukraine, including a ceasefire that seems to be holding and the start of peace talks, the situation on the ground remains deeply worrying, senior United Nations officials reported to the Security Council today.

“There are encouraging signs towards de-escalation of the conflict in Ukraine, and political and diplomatic steps are beginning to emerge towards the resolution of the crisis,” Assistant Secretary-General for Political Affairs Tayé-Brook Zerihoun said in his briefing.

He said this is due in large part to the initiative taken by President Petro Poroshenko since his inauguration on 7 June to find a peaceful, lasting resolution to the crisis in Ukraine, as well as to the unrelenting efforts of the international community.

Mr. Zerihoun highlighted the recent peace plan for eastern Ukraine put forward by the President, which included de-escalatory measures such as amnesty for those who did not participate in ‘serious crimes’; disarmament; decentralization of power and early local and parliamentary elections; and a programme for creation of jobs in the region.

At the same time, the President – upon the advice of his military commanders that the border with Russia has been secured – announced the start on 20 June of a week-long unilateral ceasefire aimed at giving armed militia a window of opportunity to disarm.

The armed militia groups have agreed to reciprocate the ceasefire, despite previously rejecting the President’s offer and continuing their offensive, noted Mr. Zerihoun. Also, peace talks have reportedly started with representatives of armed groups in eastern Ukraine.

“Overall, the ceasefire is holding,” he stated, adding that the UN expects all sides to live up to the ceasefire and to leave the door open for effective negotiation and mediation toward a peaceful resolution of the crisis.

“Today, in a welcome development and one that will not only help reduce tensions but also improve the chances for a negotiated settlement, President Putin asked the Russian parliament to revoke the authorization to send troops to Ukraine,” Mr. Zerihoun stated.

“While these are important steps, with the potential to de-escalate the situation, the Secretary-General remains deeply concerned that the realities on the ground are still grave and deeply worrying,” he stated.

While the peace plan has received support from key parties in the country, the region and beyond, there is still more hard work to be done, he said. “The international community needs to support Ukraine in surmounting the current crisis and finding a peaceful and lasting resolution to the challenges facing the country.”

Ivan Šimonović, Assistant Secretary-General for Human Rights, told the Council that the peace plan and ceasefire are positive steps in the right direction. “This creates a window of opportunity for human rights and humanitarian confidence-building measures.”

He recalled the recently released third monthly report of the UN Human Rights Monitoring Mission in Ukraine, which highlighted the rapidly deteriorating situation in the eastern part of the country during the period from 7 May to 7 June.

“However, the situation has deteriorated even further, since the cut-off date of the report,” he stated. Estimates based on information gathered from official sources indicate that from 15 April to 20 June, 423 people, including servicemen and civilians, have been killed.

In the context of the Government’s security operations, there has been an increase in reports of enforced disappearances and of excessive use of force that have led to casualties among the general population, Mr. Šimonovic reported.

He added that the population is leaving, partly due to fear, but also because of the worsening situation of economic and social rights.

Over the last two weeks, the population of internally displaced persons (IDPs) has doubled in the country with a large movement of people – estimates of some 15,200 – within the Donetsk and Luhansk regions.

As of 23 June, the UN High Commissioner for Refugees (UNHCR) has profiled more than 46,100 IDPs – 11,500 from Crimea and nearly 34,600 from the east. In the absence of a formal registration system, and given the limited access to some areas by humanitarian partners, the number of IDPs is likely to be higher, Mr. Šimonović noted.