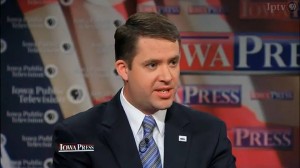 DES MOINES – On Friday, March 7th, in a letter sent to members of the Republican Party of Iowa’s State Central Committee, Chairman A.J. Spiker announced he was stepping down from his role as Chairman of the party effective upon election of a new State Chairman.

In January, the Iowa GOP badly embarrassed itself by posting a flowchart that invited people to use it to see if he/she is racist. Spiker issued an apology and later fired the man responsible for posting the flowchart to the Iowa GOP’s Facebook page.  Still, Representative Josh Byrnes called for Spiker to resign, saying “It’s a start but still not good enough. Mr Spiker needs to step down and resign,” Byrnes said.  Even right-wing GOP county chairman Gabe Haugland denounced the flowchart.

In the letter mailed Friday afternoon, Spiker announced that elections for a new Chairman would take place during the State Central Committee’s quarterly business meeting on March 29th.