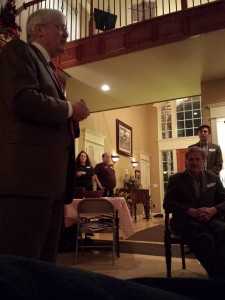 Jack Hatch speaks to North Iowans at the home of Dean Genth and Gary Swenson on Tuesday, March 4, 2014. Photo courtesy of Quinn Symonds.

Hatch went to the home of Dean Genth and Gary Swenson. According to a source at the event, Hatch talked about raising the minimum wage, healthcare for every Iowan, improving water quality, education, how the lowering of property taxes will present a challenge in the long run and ending at-will employment.

Dean Genth told NIT that the event was a success.

“It was great,” Mr. Genth said. “We had 54 people in attendance. [Hatch] was the 1st to arrive and the last one to leave. And, he talked with every person individually.”

Another man who attended, Quinn Symonds said that Hatch was “down to earth and very personable.”

Symonds also said that Hatch told him that he supports legalizing medicinal marijuana.

Hatch “supports it,” Symonds told NIT. “He’s introduced legislation for it. He said if we can regulate gambling so well we should we can regulate a medical program for marijuana. He mentioned the Des Moines register poll that shows 59% of Iowans are in support of such legislation.”

Cerro Gordo County Democratic Party Chairman Joh Stone said via social media that it was a “great event last night for Senator Jack Hatch, candidate for and the next Governor of Iowa! Good food, good attendance and a great candidate.”