UNI wrestling coach to be inducted into hall of fame 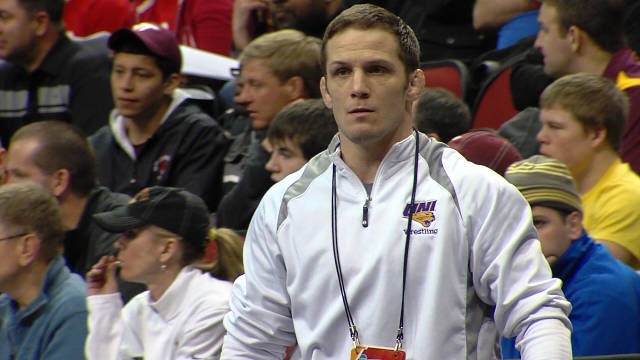 Schwab will be joined by Kevin Dresser of Riner, Va., and Tom Kettman of Gilbertville.

In addition, past Olympians Nat Pendleton and Allie Morrison will be inducted posthumously, becoming IWHOF members 112 and 113 since the first class was inducted in 1970.

He continued with a successful international career, culminating with a spot on the 2008 USA Olympic team, competing in freestyle at 145.5 pounds in Beijing, China. Schwab spent time as an assistant coach at Virginia Tech and Iowa before being named head coach at the University of Northern Iowa in 2010. The Panthers are undefeated at 12-0. UNI has never won 12 consecutive duals in the history of the program that dates back to 1923.

UNI’s final dual is set for Feb. 23 at Old Dominion.

Kevin Dresser was a two-time state champ at Humboldt High School, a two time Big Ten champion and two time All-American at the University of Iowa, winning the 1986 NCAA championship at 142 pounds. He is a high school coach, winning 13 state titles at Grundy and Christiansburg high schools in Virginia. In 2006, Dresser was named head wrestling coach at Virginia Tech.

Tom Kettman coached at Don Bosco High School in Gilbertville for 30 years – 19 as an assistant and 11 as the head coach. Kettman’s teams won five traditional state titles and seven dual state titles. He continues to be involved with the program at Don Bosco.

Nat Pendleton and Allie Morrison were Olympians in the 1920s. Davenport native Nathaniel Pendleton was a silver medalist at the 1920 Olympics in Antwerp Belgium. He went on to become a famous professional wrestler and film star. Marshalltown native Allie Morrison was an Olympic champion at the 1928 Olympics held in Amsterdam, becoming the first native Iowan to earn Olympic gold in any sport.