This news story was published on January 12, 2014.
Advertise on NIT • Subscribe to NIT 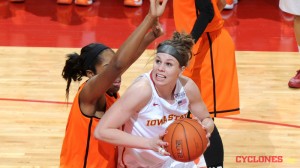 AMES – No one is perfect.

After the game, star freshman Jadda Buckley was apologetic for losing to the Cowgirls, saying to fans “So sorry for letting you down tonight. Motivated to bounce back Wednesday.”

Coach Bill Fennelly also was also sorry for the loss, saying “I want to apologize to Cyclone Nation! Our game tonight was not what you all deserve from our team and that is MY job! See you Wednesday.”

It was a tightly contested battle right from the start as the game featured six first-half lead changes. The Cyclones held a 23-17 lead in the rebounding game with a game-high seven boards in the first half by senior Hallie Christofferson. Iowa State would enter the locker room clinging to a 32-29 lead with six different Cyclones putting points on the scoreboard.

It would be Oklahoma State who would break things open early in the second half. The Cowgirls would grab as much as a 10-point lead with 12 minutes left, forcing the Cyclones to play catch up. Iowa State would come within three late in the game as Seanna Johnson knocked down a pair of free throws to make it 63-60, but Oklahoma State never let up the pressure and the Cowgirls handed ISU its first loss of the season.

Iowa State concludes its three-game home stand when it takes on West Virginia on Wednesday at 7 p.m. in Hilton Coliseum.