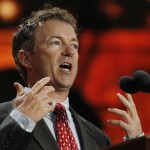 CEDAR RAPIDS, Iowa, May 11 (UPI) — U.S. Sen. Rand Paul, R-Ky., attacked former Secretary of State Hillary Clinton in an Iowa speech that appeared to be the kickoff of the 2016 presidential race.

Paul was one of the speakers Friday at the Iowa Republican Party’s Lincoln Day Dinner in Cedar Rapids, NBC News reported. He described Clinton’s handling of the deadly February attack on the U.S. consulate in Benghazi, Libya, as “dereliction of duty” and said it “should preclude her from holding higher office.”

Clinton is believed to be contemplating a run for president in 2016. Paul, who was elected to the Senate in 2010, is the son of Rep. Ron Paul, R-Texas, a libertarian who has run twice for the Republican nomination.

Paul’s attack on Clinton was his biggest applause line from a generally friendly crowd.

Paul has said he will not decide until next year whether to enter the 2016 race.