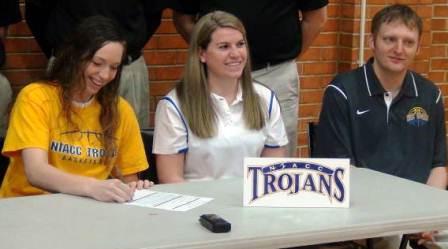 Rush, a 5-foot-10 forward, helped lead Mason City High to three straight state tournaments and is the first signee for the NIACC women’s basketball program for the 2013-14 season.

“I looked at a couple of other schools, but NIACC was the best fit for me,” Rush said Monday morning after signing her letter of intent in the Mohawk gym. “It’s close to home and the style of basketball is what I like.

“I’m just going to do what I always have and give it my all.”

Rush averaged 10.2 points per game for the Mohawks, who won their first-ever state tournament contest and advanced to the Class 5A semifinals during her senior season.

“I think in my mind she might be the most underrated player in the state,” Mason City coach Curt Klaahsen said. “She’s been such a big part of our success the last four years.

“Defensively, she had to guard someone taller than her on every occasion. She totally recreated her shot after her sophomore year. She became a 3-point threat. She’s an all-around great basketball player through a lot of hard work.”

“It’s great that she’s staying home,” Klaahsen said. “We can go and watch her for the next two years at NIACC.”

“There’s a good group of girls out there right now,” Rush said. “Next year is going to be a good year.”