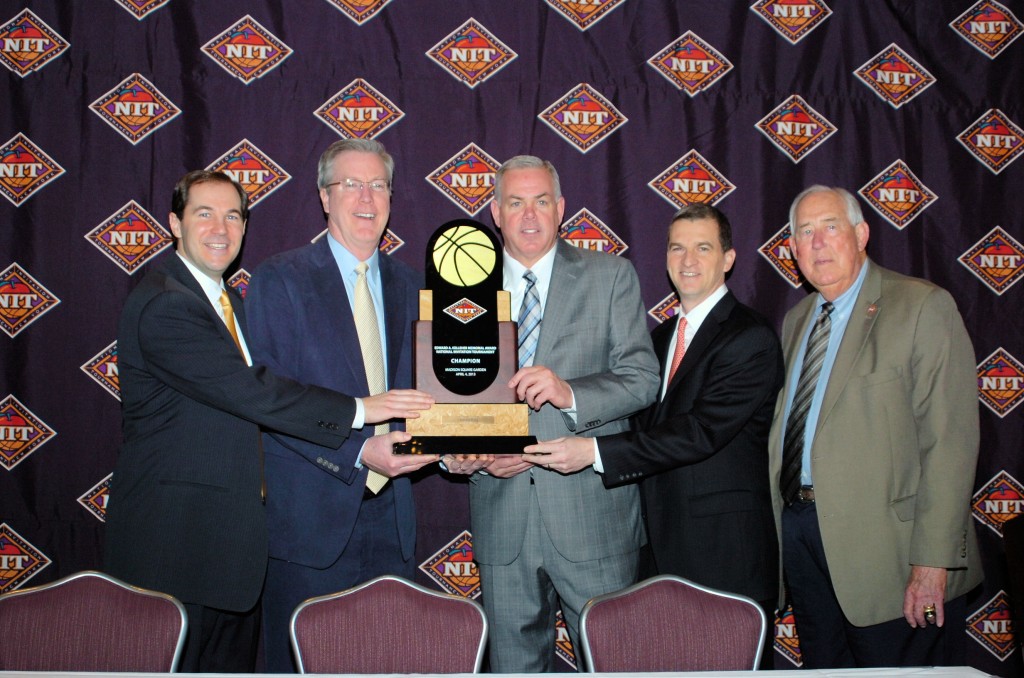 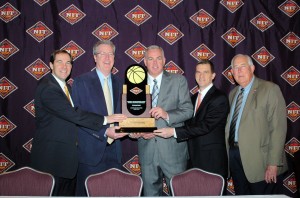 I’ll just take a few minutes and I want to first of all complement Scott, Dave, Mark and Fran on earning their way to the NIT Semifinals in New York City. This is a tremendous accomplishment and you are to be congratulated to you and your teams and staffs and support personnel. It’s going to be a great final four and we’re very excited to have you guys here.

We’re very pleased to have the teams here. We’re look forward to hosting the teams in the event tonight that is just for their benefit at the Boathouse. We’ll have a great semifinals. Bob, thank you very much.

Well I know our staff was here in 09 and it was one of the best experiences we had. The NIT committee does an outstanding job. Being in New York, you arrive off the bus people see time square and they see the lights. Right away coaches know we need to do bed check. But playing in the Garden is one of those experiences our 09 club will never forget. I know once we knew we were in the NIT as a staff we just wanted to do everything we could to help our team get here so they would have the chance to experience this. As we all know the NIT has been around since 1938 and just how prestigious this tournament is.

As far as our basketball team goes, if you like up and down play, Coach Rose and BYU one of the fastest teams you’ll see play and we want to do the same thing. So we both agreed that we’re going to use the 24-second shot clock tomorrow and probably that won’t come into effect either. But I think everyone will enjoy watching a fast-paced game and a lot of quality players out there.

Every coach dreams of playing in April, wants to play in April and I know we’re very excited and privileged to be a part of this tournament. They gave me 30-seconds up here and I went a little bit over but any way I look forward to seeing everyone tomorrow night.

Thanks to the committee for having the confidence in our team and our guys to play in this prestigious tournament. I think that at BYU the NIT is extremely special. The NIT Championships in 51 and 66 are always on the minds of our fans and the history has actually has gone through with our players as far as understanding the importance of this event. I’m so proud of our players for embracing the opportunity to play and continuing to play.

When we got the invitation on Sunday night, our players were so excited in practice on Monday and we played a terrific game against Washington. We’ve actually played our best basketball of the season the last two games. So, we’re excited to be here. We tried to manage this as a staff to where guys wouldn’t get too excited about playing for the prize which is coming to Madison Square Garden and playing in the Mecca of college basketball or basketball itself. We tried to have them approach each game as an opportunity to let’s get another game, let’s play another game. Our guys have been so good embracing that and I’m proud of them. There’s a lot of ways it can go when disappointment sets in. We’ve been to the NCAA Tournament six years in a row and this group has been terrific and wonderful to coach the last three weeks.

We’re excited about the opportunity tomorrow night. No so excited to play Baylor. We played Baylor back in December and they kind of handled us. But our guys do know the challenge. We understand that we’re playing a very talented team, a very hot team, a team that’s on a roll. Our challenge will be to control Pierre Jackson which we did not do very well the first time. We look forward to the opportunity tomorrow night. Our guys are excited our staff’s excited. We’re just really, really pleased with the opportunity to play here and hopefully we’ll play well.

I’m really happy to be here. I’ve got a lot of respect for these guys and their programs and what they’ve done. Scott and I used to go head-to-head in the Big 12 and Dave and I have had some encounters in the NCAA Tournament and obviously Fran and I have something in the future we’ll be playing each other quite a bit in the future.

So, Coach Rose said how proud he was of his team, I’m unbelievably proud of my team. About mid-February I didn’t know if we were ever going to figure it out and hit rock bottom at Georgia Tech and since then our kids have been great. They have embraced this.

We’re excited. We feel like we’re playing our best basketball of the season here late and have a great team; a fun team to coach and a fun team to be around. Got a little injury to Seth Allen which has set us back a little bit but guys have stepped up. So, we’re happy to be in New York. I was lucky enough to be at Texas A&M a few years ago and come in here and win the Preseason NIT. So I know how special this place is with Times Square and it’s been great for our families too. It’s spring break for families so we’re kind of treating this as a family outing so everybody’s happy. Thanks to the committee for getting us in. You’re always nervous when it comes to committees and for us to get in was great and our guys have taken advantage of it.

I just want to say this when I looked at the NIT field on Sunday night, I was amazed at the quality of teams that we knew we were going to play. You think about our first game was against Indiana State. They beat Wichita State on the road. We played Stony Brook – 13 road wins which was number one in the country. 25 wins regular-season champion. I can tell you this anything short of phenomenal focus in concentration in those first two games, we don’t make it to play Virginia. Then you look at Virginia and you look at who they beat and what their record was.

That had been quite frankly somewhat problematic for us – getting a signature road win against a quality opponent. We played some teams well on the road. Seem like every time we got in a game like that someone made a three with 10 seconds to go but that’s what the journey is. That is the challenge before a team. Go on the road play a team that’s playing well and beat them in their building and that’s what we had the ability to do and that’s what the NIT gives our young teams.

For us, a number of our players have never even been to New York, as you can imagine coming from Iowa. We do have one player from New York, Melsahn Basabe, who was the happiest guy in the locker room, his whole family is going to be here. I remember trying to say Melsahn come on out to Iowa. He knew the Big Ten but he didn’t know a lot about Iowa so that was sort of a leap of faith for him and then be able to come back here and play at Madison Square Garden for the first time is a thrill for me. It’s a thrill for him but it’s truly a thrill for me.

I can’t tell you the respect I have for these guys up here. We’ve gone against each other in recruiting but I’ve watched them coach. Maryland is going to be a phenomenal addition to the Big Ten in so many ways. I still remember the one time I coached against CM. I took my Lehigh team down there, he had Will Purdue so we were a little over matched and we were down about 27. I was praying he’d take his starters out, which he did. We ended up losing by 14 so it was a great game for us. I always remembered the respect he showed our club and I think that typifies the person Coach Newton is and the same can be said for all the committee members. I got to know Les really well while I was working in the Southern Conference.

We’re just thrilled for the opportunity, excited. It’s the first time for the University of Iowa but we’ll bring some people and a lot of families will be here and hopefully we’ll play well. Thank you.