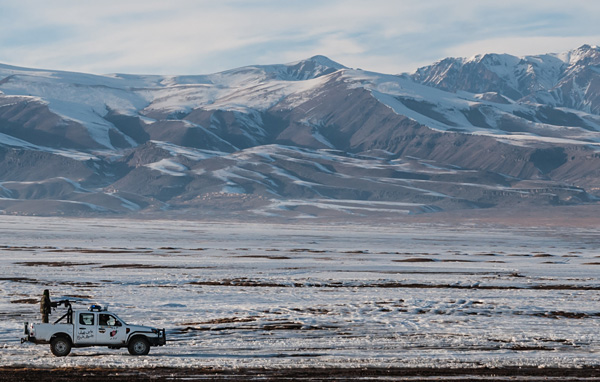 GHAZNI PROVINCE, AFGHANISTAN – Leading to the small village of Shagowlay, laid out along a plain between snowy mountains, winds a road that was untraveled until recently. The road is one of very few that connects the tiny villages of Qara Bagh district. The road is secure now because of coordinated efforts between the Afghan Local Police (ALP), and elements of the Afghan Uniformed Police and Afghan National Army.

The fact that the road is now safe for travelers is only a small glimpse into how far the ALP has come in only five months and it helps to shed light on how the ALP coordinates with and complements Afghan National Security Forces (ANSF).

“When we began to travel here to set up the ALP, it was very difficult because the situation was much worse then,” said Mohammed Azam, the Qara Bagh ALP commander. “The main road was blocked by the Taliban who set up checkpoints and were imposing their rule on the people.”

The ALP set up its own checkpoints along the road to bolster security along the route and make it safe to travel.

“Now the road is clear for everyone: the Afghan National Army, the Afghan Uniformed Police, but especially for the villagers,” said Azam.

In the past, communication between the ALP and other ANSF elements was an issue because there was no centralized system for coordination.

A new plan was put into place in Qara Bagh district that serves to facilitate coordination between ALP and their ANSF partners. A district Operation Coordination Center serves as a system for ANSF and other government agencies to respond to any incidents that may occur within the district and allow for a unified government response.

Recently an ALP patrol was attacked with rocket-propelled grenades and small arms fire from a compound while conducting a routine patrol through a local village. The ALP surrounded the compound and immediately contacted the district Operation Coordination Center.

Afghan Uniformed Police, along with a unit from the Afghan National Army, responded to the scene to assist the ALP at the compound. Under the guidance of Afghan National Army Special Forces, the combined force was able to work together to control the situation.

“We have a very good relationship with these other elements. We also have very good coordination and communication when we are on a common mission or patrol,” said Azam. “We work for the same government and we work in the same territory. We sit together and coordinate our plans and we also discuss the problems in the area and how we can improve things.”

ALP and ANSF searched the compound, where tunnels were discovered underneath the building. It was discovered that inside the tunnels, insurgents had cached weapons, anti-personnel mines and other materials used to make improvised explosive devices.

Azam discussed how the local population is responding to the presence of the ALP, “The elders of the villages are coming to me and saying things like, ‘We are very happy that you guys are here and we feel much safer now.’”

“I am very proud to be with the ALP and I am happy to serve the people of this area. I will try to protect them from bombs and any insurgents that want to come here and harm them,” said an Afghan Local Policeman.