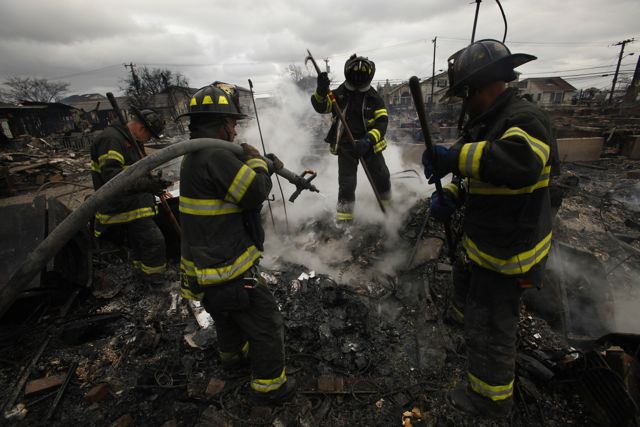 BEACH HAVEN, N.J. — Sandy’s departure from the Northeast Tuesday brought no hint of relief, revealing instead a tableau of splintered trees, severed beaches, shuttered businesses, and the harsh reality that the storm will test even the most hardened resolve in weeks to come.

The U.S. death toll rose to 50, including three children, and estimates of the property damage soared to $20 billion, which would make Sandy among the nation’s costliest natural disasters. More than 8 million homes and businesses in 17 states were without power, half of them in New York and New Jersey. Some outages could stretch into next week.

In the beach town of Breezy Point, N.Y., more than 80 homes were destroyed by a ferocious electrical fire that injured three people. All that remained of many homes were ashen foundations and concrete stoops that once led to front doors.

Inland, “thundersnow” blizzards buried more than half of West Virginia, where roofs of some houses began to collapse.

Near Hackensack, N.J., authorities launched a frantic rescue effort after a flood spilled over a riverbank, rose to the bottom of stop signs in less than an hour and trapped scores of people. Iconic pieces of the Jersey Shore, said Gov. Chris Christie, were “washed into the ocean.”

Pockets of New York City, particularly Manhattan, remained crippled. The subway system was flooded and closed for a second day. Weather also closed the New York Stock Exchange for the second day in a row – the first time that had happened since 1888. Normal trading was expected to resume Wednesday.

Authorities pledged an unprecedented recovery and relief effort. “No bureaucracy. No red tape,” said President Barack Obama, who called off a third day of campaigning for next week’s election and prepared to visit storm zones with Christie on Wednesday. “America is with you.”

Obama unlocked federal money for New York, New Jersey and Connecticut with a major-disaster declaration, skipping post-storm assessments and signing the paperwork even as the tail end of Sandy remained overhead. Christie asked Obama to speed up the declaration process “without all the normal FEMA mumbo-jumbo,” and the president agreed — finding the sufficient damage threshold self-evident, officials said.

U.S. Transportation Secretary Ray LaHood announced he had made $13 million in quick-release emergency funds available to New York and Rhode Island — the first two states that asked for it — to begin repairing roads, bridges and tunnels.

Camaraderie was apparent throughout the region. At a hospital in Manhattan, people formed a human chain to pass fuel up to the 13th floor, the only way to keep an emergency generator operating.

Power companies were working feverishly and in some cases — in suburban Pennsylvania, for example — had restored power to residences five days earlier than feared.

“Nature is an awful lot more powerful than we are,” said New York Mayor Michael Bloomberg. But he added: “We are on the road to recovery.”

Despite the unified front, some areas bordered on desperation.

Diane Vanderhorn, 46, hiked into Beach Haven, N.J., to learn the state of her little blue bungalow. Neighbors were coming out, dazed and carrying shopping bags full of clothes. “You been back yet?” one asked. Vanderhorn said she had not; the man shook his head and kept walking.

As she got closer, she saw trash cans rolling in the street, a boat grounded near an intersection. When she stepped inside, the rug squished under her feet. Sandy had flooded her home with sea water and filled her boyfriend’s black sedan to the dashboard.

“Oh my God! Oh my God!” Vanderhorn cried. “What am I going to do now?” She broke down in sobs. “I’ve got three kids. Where are we going to go? There’s no money.”

In New York, Joel Gordin, 57, is a part-owner of the Cowgirl Seahorse restaurant. He woke up Tuesday desperate to know how the restaurant, near the southern tip of Manhattan, had fared in the storm. He rode his bike across the Brooklyn Bridge to see — and found that flood waters had tossed the place so severely that it appeared as though someone had shaken the building like a snow globe.

“Nothing was where it should have been,” he said. “I was devastated by it.”

“I’ve never seen my husband cry,” said his wife, Emily Sachar. “That was something. I guess it was just all the elbow grease he put into that place.”

Christie, too, was overcome with emotion after viewing the waterfront damage. He saw submerged homes and boats piled on top of each other like toys, and called the devastation “unthinkable.”

“I was just here walking this place this summer. The fact most of it is gone is just incredible,” he told the mayor of Belmar, N.J., Matt Doherty.

The misery will be extended by the blow Sandy delivered to the region’s infrastructure.

In New York, officials said the storm posed the greatest threat in the subway system’s 108 years. Flooding, they said, might have destroyed equipment, rail lines and power sources. The subway system, which ferries 5 million people a day, might not be running again until this weekend, officials said.

Thousands more flights scheduled for Tuesday and Wednesday were canceled, bringing the total to more than 18,000. That surpassed the 15,000 flights terminated by Hurricane Irene in August 2011. Some airlines had already begun to cancel Thursday flights.

Several New York hospitals had to evacuate patients after power supplies failed. Without functioning elevators, workers carried patients down the stairs, including babies from neonatal intensive care as nurses and others carefully balanced the infants’ IV lines.

Blizzard conditions — with winds that created four-foot piles of snow in some areas and closed numerous highways and roads — struck portions of West Virginia, Maryland, Tennessee and North Carolina.

In West Virginia, entire cities and even counties were cut off from the rest of the state. Yet shelters remained nearly empty, with most residents riding out Sandy at home.

“We have a different problem here in West Virginia, and that’s people and their pride,” said Debra Palmer, the state’s assistant regional emergency services director. “They’re self-sufficient. They tend to not take advantage of things that are right in front of them.”