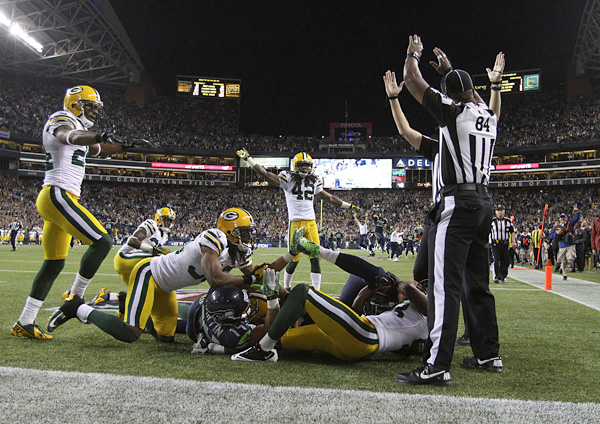 By Danny O’Neil, The Seattle Times –

SEATTLE — For two quarters, Seattle played the kind of defense that leaves bruises and cripples offenses.

For most of four quarters, the Seahawks played the kind of offense that makes football fans cringe.

And on the final play, the Seahawks made the kind of play that left a city screaming for more.

Russell Wilson, facing fourth-and-10 from the Green Bay 24-yard line, threw into the end zone and Golden Tate jumped up in a crowd and came down holding the ball, along with M.D. Jennings for the game-winning touchdown.

That triggered first a replay review and then a delay. The coaches shook hands and the teams left the field, only to be summoned back for the extra-point try that finalized a game that defied explanation and expectations.

The final score was Seattle 14, Green Bay 12, in what was a head-scratching, foot-stomping puzzler. The Seahawks ended the night shouting in celebration after one of the greatest defensive first halves in franchise history, one of the more mundane offensive performances and then an incredible finale as Tate caught the second of his two touchdown passes on the game’s final play at CenturyLink Field.

That came after Seattle got as close as the Packers’ 7-yard line on its previous possession before turning the ball over on downs, nearly forcing a turnover on the ensuing play, forcing a fumble that the Packers recovered. Seattle forced a punt, getting the ball back at the Green Bay 46.

Wilson completed two passes out of his next six plays. The first was a 22-yard pass to Sidney Rice, and then came the winning pass to Tate.

Seattle held the Packers to 87 yards and no points in the first half, Green Bay crossing midfield only once and never getting farther than the Seattle 49. The Seahawks led 7-0 on Wilson’s 41-yard touchdown pass to Tate in the second quarter.

Green Bay scored on each of its first three possessions in the second, totaling 184 yards on those three drives. The Packers settled for two field goals, and when Green Bay scored on Cedric Benson’s 1-yard touchdown run with 8:44 left in the game, the Packers led 12-7.

The Seahawks didn’t attempt a pass in the third quarter, and didn’t have a first down until six minutes had elapsed in the fourth quarter, and even that came by way of a roughing-the-passer penalty against the Packers’ Erik Walden, which nullified an interception.

The Seahawks got the benefit of another penalty later that possession on first-and-25 when a pass-interference penalty cost Green Bay 32 yards. Seattle got as far as the Green Bay 7, but the Seahawks were stopped on fourth-and-3.

Seattle’s first four possessions produced four punts. The Seahawks were like a heavyweight establishing their jab. Marshawn Lynch ran repeatedly into the Packers defense, effectively but not spectacularly.

In the second quarter, Seattle landed the uppercut. Wilson had time in the pocket and threw a perfect pass to Tate, who had gotten behind the Packers defense and was open between cornerback Tramon Williams and safety Charles Woodson.

The Seahawks’ first-half defensive performance was nothing short of suffocating.

Green Bay’s Aaron Rodgers attempted 15 passes in the half, but was sacked eight times.

Rodgers completed 12 of those 15 passes, but none for more than 14 yards. The one time the Packers crossed midfield, on their first possession of the game, Rodgers was sacked by Bruce Irvin, forcing a punt.

Green Bay changed its game plan dramatically in the second half. The Packers had one designed run among the 14 plays they ran in the first quarter. They handed the ball to Cedric Benson on five of their first six plays in the third quarter.

That started what was Green Bay’s most sustained drive of the game to that point. The Packers totaled 87 yards of offense in the first half. They had 60 during their first drive of the second half, which resulted in a 29-yard field goal by Mason Crosby to cut Seattle’s lead to 7-3.

Green Bay drove for another field goal on its ensuing possession, this time a 66-yard drive that culminated in Crosby’s 40-yard field goal and Seattle’s lead was down to 7-6.