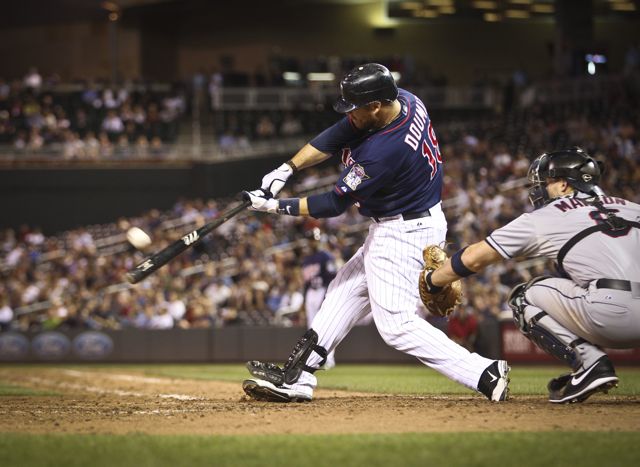 MINNEAPOLIS — The Minnesota Twins media guide is filled with numerous biographies of players most fans probably had never heard of before this season.

For those people still following this team, Deduno and Florimon have gone from foreign concepts to household names.

Both had big performances Monday night, as the Twins defeated Cleveland 7-2 at Target Field.

An announced crowd of 27,526 — the smallest in the ballpark’s three-year history — watched Deduno carry a no-hit bid into the sixth inning, as shortstop Florimon made highlight plays both offensively and defensively.

Deduno (6-3) held the Indians to two runs on three hits over seven innings, with three walks and six strikeouts. It was his eighth quality start — at least six innings pitched, three or fewer runs allowed — in 12 tries, and the Twins improved to 8-4 in Deduno’s starts.

Florimon made two big defensive plays and went 2-for-4 at the plate with an RBI double, a triple and two runs scored.

The Twins won the final three games in the four-game series to pull into a fourth-place tie with the Indians, who led the American League Central on the morning of June 24 but are 15-41 since the All-Star break.

Cleveland righthander Justin Masterson began with three no-hit innings of his own, but Alexi Casilla recorded a leadoff single in the fourth inning. Casilla hit a sharp comebacker that caromed off Masterson’s leg, into foul territory. Joe Mauer followed with a single to right field, advancing Casilla to third base.

Then, Justin Morneau hit a sacrifice fly to center, giving the Twins a 1-0 lead. That gave Morneau 74 RBI for the season, including at least one in each of his past six home games.

The excitement for Deduno’s no-hit bid grew a bit in the fifth inning, when he struck out Lonnie Chisenhall, Cord Phelps and Brent Lillibridge on 11 pitches. But his pitch count for the game at that point was 75; he needed 50 to get through the first three innings.

Michael Brantley delivered Cleveland’s first hit with one out in the sixth. This came after Shin-Soo Choo drew an eight-pitch walk — Deduno’s third walk of the game. Brantley’s single up the middle moved Choo to third base, and Carlos Santana hit a sacrifice fly to center, tying the score at 1-1.

But the Twins quickly regained the lead. Florimon, who made a nice defensive play to end the top of the sixth, started the bottom half with a triple to deep left field. Ben Revere followed with an RBI single, and with two outs, Morneau singled, scoring Revere to make it 3-1.

Florimon made another fine defensive play to start the seventh, using his bare hand to field a slow bouncer from Casey Kotchman from a spot just in front of second base and throwing him out at first. That loomed large as the next batter, Chisenhall, lined what could have been a tying home run just above the right-field wall.

Florimon’s RBI double came in the seventh inning, when the Twins scored three runs to stretch out a 6-2 lead. Ryan Doumit hit his 16th home run in the eighth inning to cap the scoring.