Romney accepts GOP nomination, promises to lead US to prosperity 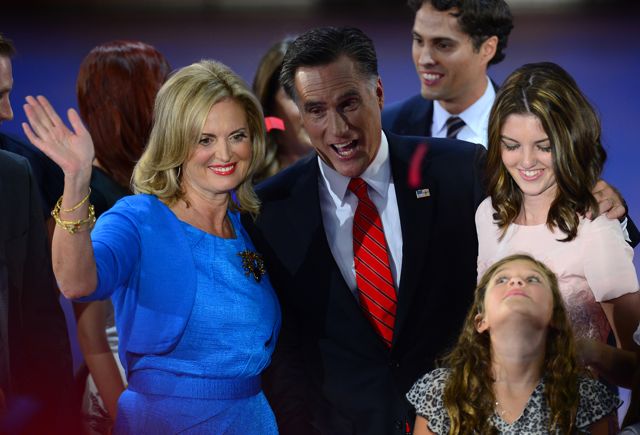 TAMPA, Fla. — Presenting himself as a turnaround artist for economically troubled times, Mitt Romney accepted his party’s presidential nomination Thursday night with a forceful promise to lead America to renewed prosperity after years of dashed expectations.

The Republican challenger, standing before a packed arena in the swing state of Florida, repeatedly invoked President BarackObama’s 2008 slogan of hope and change, saying that his November opponent had instead delivered disappointment and division.

“How many days have you woken up feeling that something really special was happening in America? Many of you felt that way on Election Day four years ago,” said Romney, in remarks that were directed beyond the hall to millions watching on television. “But tonight I’d ask a simple question: If you felt that excitement when you voted for Barack Obama, shouldn’t you feel that way now that he’s President Obama?

“You know there’s something wrong with the kind of job he’s done as president,” Romney said, “when the best feeling you had was the day you voted for him.”

Romney’s focus, like that of the nation’s voters, was almost exclusively on the stubbornly sluggish economic recovery. He blamed it on Obama’s background in government, in contrast to his own deep business experience.

“He took office without the basic qualification that most Americans have and one that was essential to his task,” the 65-year-old nominee said. “Jobs to him are about government.”

He condemned Obama as a failed president, linking him to the last one-term Democrat, Jimmy Carter.

He mocked what he described as the incumbent’s lofty aims to “slow the rise of the oceans and to heal the planet.”

Then, after a dramatic pause, he pointedly stated: “My promise is to help you and your family.”

During a 38-minute speech that was more prosaic than poetic and included considerable autobiographical detail, Romney sought to push back against millions of dollars in ads run against him by Obama and Democrats that cast him as a ruthless, avaricious, corner-cutting corporate chieftain.

He also tried to play against the notion that, as a child of privilege, he could not relate to struggling Americans. He said that as a young man he was determined to strike out on his own, rather than remaining in the state where his father was an automobile executive and popular governor: “I wanted to go some place new, and prove myself.”

Obama, who inherited the worst economic crisis since the Great Depression, got no reprieve inside the convention hall. To the contrary, one speaker after another said the president had to stop blaming his predecessor, President George W. Bush, for the country’s disappointing job growth.

“You were dealt a tough hand, but your policies have not worked,” said former Florida Gov. Jeb Bush, not just vouching for his party standard-bearer but also defending his older brother. “A real leader would accept responsibility for his actions and you haven’t done it.”

Romney’s speech — the prime-time finale to a storm-shortened Republican National Convention — amounted to the biggest sales pitch of his life, serving several purposes.

Citing his work in the private sector, where he earned a fortune buying and selling companies, he pledged to pull the country from its economic doldrums and create millions of jobs by expanding domestic energy development, increasing overseas trade and slashing the size and spending of the federal government.

Romney praised the killing of al-Qaida leader Osama bin Laden but accused Obama of conducting a weak and vacillating foreign policy. Referring to Obama’s comment, captured on an open microphone, that he would have more flexibility to deal with Russia and its leader, Vladimir Putin, in a second term, Romney drew a roar when he vowed, “Under my administration, our friends will see more loyalty and Mr. Putin will see a little less flexibility and more backbone.”

The first Mormon presidential nominee from a major party, Romney opened up about his faith, describing his joy in helping fellow congregants. He leavened it at one point with humor, saying that he had refused to risk losing his fellow worshipers’ savings, during his uncertain early days in business. “I didn’t want to go to hell, too,” he said. (But, he added, Episcopalians who had invested made out well.)

Some of those Romney had assisted were part of the program, and their first-person accounts of family tragedy, during which Romney lent time and a sympathic ear, brought tears to the eyes of some delegates.

“When it comes to loving our neighbor, we can talk about it or we can live it,” said Pam Finlayson, describing Romney’s sensitive ministering to her daughter, Kate, who was born prematurely and died in 2010. “The Romneys live it every single day.”

Other character witnesses offered testimonials to Romney’s business ethics, personal integrity, record of promoting diversity as a moderate governor of Massachusetts and turning around the scandal-plagued 2002 Winter Olympics.

The crowd cheered references to Bain Capital, the private-equity firm Romney co-founded, as several speakers sought to rebut negative portrayals that have damaged his image. Ray Fernandez, a former sales representative at a contact-lens company, said Bain’s turnaround of the firm helped workers like him thrive financially.

Romney’s best friend and longtime business partner, Bob White, said that Bain partners were held to account for their performance in the rough-and-tumble business world and “when things went wrong, we would not blame others” — another jab at Obama’s perceived lack of accountability.

The Obama camp responded with a far less flattering portrayal of Romney’s Bain record, saying in a written statement that “his sole focus was on reaping profits for himself and his investors, no matter the costs to workers, companies and communities.”

In a rare unscripted moment, a rambling Clint Eastwood, 82, opened the prime time hour with an extemporaneous appearance in which he spoke to an empty chair he presented as Obama. After 15 of the oddest minutes of the convention, the actor yielded the stage to Marco Rubio, who introduced Romney.

The selection of the Florida senator, Cuban-American, was a nod to his state’s must-win status for Romney, and the party’s wider effort to shrink Obama’s big advantage among Latino voters.

“Mitt Romney’s success in business is well known,” Rubio said. “But he’s more than that. He’s a devoted husband, father, and grandfather. A generous member of his community and church. Everywhere he’s been, he’s volunteered his time and talent to make things better for those around him,” he said.

At the end of his speech, Romney was joined onstage by his running mate, U.S. Rep. Paul D. Ryan of Wisconsin, and their wives, children and some of the Romneys’ many grandchildren for the traditional shower of confetti and a rain of red, white and blue balloons. Behind them, bursting fireworks played across a constellation of jumbo-size TV screens.