Ryan gets little bounce in polls, looks to GOP convention 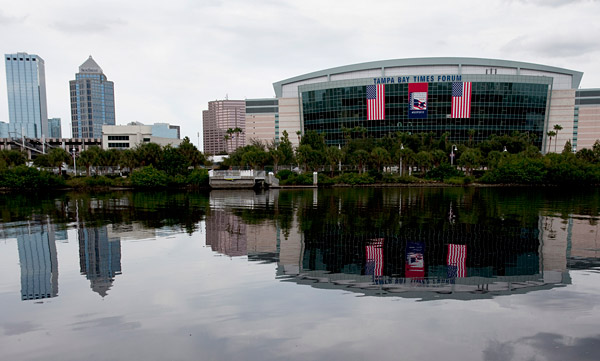 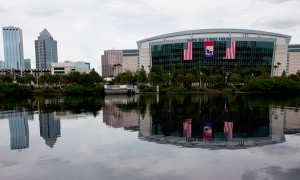 WASHINGTON — The lack of any bounce in the polls from Mitt Romney’s selection of Rep. Paul Ryan as his running mate is raising the stakes for Ryan at next week’s Republican National Convention.

Ryan, for 14 years a congressman from a southeastern Wisconsin congressional district, is barely known to most voters. And Democrats have tried relentlessly to introduce him as a ruthless conservative eager to slash Medicare and lower taxes for the wealthy.

(PHOTO: The Tampa Bay Times Forum, site of the 2012 Republican National Convention, is viewed across the water of the Garrison Channel from Harbour Island in downtown Tampa, Florida, on Thursday, August 23, 2012. Weather forecasts continue to show Florida in the path of Tropical Storm Isaac.)

Next week, Ryan will offer the public an unfiltered look, as he accepts the Republican vice-presidential nomination and speaks in a prime time slot Wednesday evening.

Such forums often give lesser-known candidates momentum, at least for a while, as a wildly enthusiastic crowd cheers them on. But Ryan faces a different kind of challenge.

Romney picked Ryan because he’s a favorite of conservatives who relish his blueprint for curbing government spending, including changes to the Medicare program for seniors and some people with disabilities.

“What you see in the polls now is Paul Ryan at first blush, and he’s had a controversial first few weeks,” said Jeffrey Horwitt, an analyst at Hart Research, a Democratic firm that conducts the NBC News-Wall Street Journal poll with a Republican firm.

After Romney announced the Ryan pick Aug.11, Gallup’s first poll found that the ticket had gained 1 percentage point. That’s in line with recent choices. In 2008, Sarah Palin gave the Republicans a 2-percentage-point bounce, while Joe Biden cost the Barack Obama ticket 2 percentage points. The boost was greater for vice presidential candidates in 1996, 2000 and 2004.

Another measure, though, suggests more trouble — or potential — for Ryan. In recent elections, the running mate almost always has made more voters, at least initially, say they’re more likely to vote for the ticket.

Ryan so far has brought no such help. About one out of five registered voters think the Ryan choice makes them more likely to vote for the Romney-Ryan ticket, while 23 percent said it made them less likely, according to the NBC-Journal survey.

The same attitudes were evident in the key swing states of Florida, Ohio and Wisconsin, according to a new Quinnipiac University/CBS News/New York Times survey:

The one clear advantage Ryan brought was in his home state. Democrats carried Wisconsin by 14 percentage points in 2008, but “it now clearly qualifies as a battleground,” Franklin said.

That could be significant in a close national race, as Ryan could be the first vice-presidential nominee to deliver a crucial home state since Lyndon Johnson in 1960. Presidential candidates largely have gotten away from picking ticket mates who can deliver swing states: In 2008, the candidates were from Delaware and Alaska, each with three electoral votes that were unlikely to swing to the other party.

Even in his home state, though, voters are still getting to know Ryan. Four years ago, the largely unknown Palin was a hit at the Republican convention, and she and McCain went ahead of Obama by 3 percentage points after it ended.

McCain soon stumbled, and Palin’s image suffered as voters came to know her better. During the week of the convention, Gallup found that 28 percent viewed her unfavorably. By Election Day that figure jumped to 47 percent.

Ryan’s standing faces the same kind of volatility, though Douglas Holtz-Eakin, a top McCain economic adviser in 2008, thought the candidate’s ability to clearly explain his views will be an asset.

“This is a better opportunity than Republicans have had in a long time to have a genuine debate about the quality of policy,” he said.

Democrats will roar back a week later at their convention and cast Ryan as a coldhearted ogre.

His Medicare plan “is based on the idea of transferring rising health care costs onto senior citizens themselves,” said Rep. Chris Van Hollen of Maryland, the top Democrat on the House Budget Committee, which Ryan chairs. Ryan maintains that allowing seniors to pick health care plans, with government help, will spur more competition and reduce prices.

Ryan can take some comfort in the last vice-presidential pick who was greeted in such a lukewarm fashion: Dick Cheney. In 2000, George W. Bush’s surprise choice of the former defense secretary made 16 percent more likely to vote for the ticket and 14 percent less likely. Cheney was barely known to the public at the time.