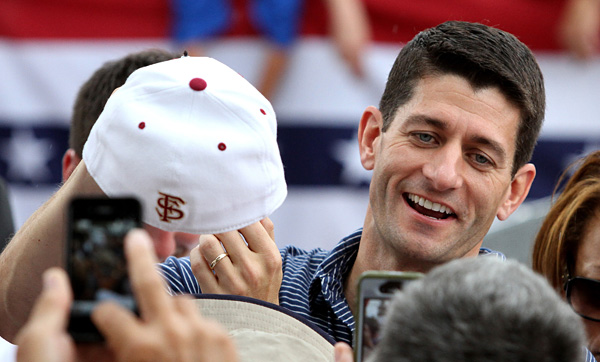 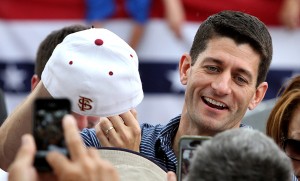 Ryan made the charge during a campaign speech at the largest retirement development in Florida, a state with the biggest proportion of seniors in the country and the most electoral votes of any 2012 battleground. The state is considered a must-win for Mitt Romney, and politicians in both parties say the Medicare debate could sway the outcome.

(PHOTO: Republican vice presidential candidate Paul Ryan receives a Florida State University hat from a supporter, after he delivered remarks at a rally in The Villages, Florida, Saturday, August 18, 2012.)

The Republican ticket launched its Medicare offensive last week, in an effort to pre-empt an issue that historically favors Democrats. Despite nervousness from some GOP strategists, who worry that the fallout could hit down-ballot Republican candidates, the Wisconsin congressman’s remarks opened a fresh line of attack.

Standing in front of a new Romney campaign banner that read “Protect & Strengthen Medicare,” Ryan pressed his case for overhauling the health care program for seniors and the disabled. Romney and Ryan want to give future seniors the option of using a government subsidy to shop for private health insurance, instead of enrolling in the traditional government program. Obama has said the voucher plan could cost seniors $6,400 a year.

Ryan, joined onstage by his 78-year-old mother, said the president’s 2010 health care law threatens the health care of current seniors, because it authorizes the creation of a panel of experts with authority to recommend reductions in out-of-control Medicare spending.

“He (Obama) puts a board of 15 unelected, unaccountable bureaucrats in charge of Medicare who are required to cut Medicare in ways that will lead to denied care for current seniors,” said Ryan, 42, who was carrying the day’s public campaign duties while Romney attended private fundraising events on the Massachusetts vacation retreats of Martha’s Vineyard, Nantucket and Cape Cod.

Ryan said that, if elected, he and Romney “will restore the promise of this program, and we will make sure that this board of bureaucrats will not mess with my mom’s health care or your mom’s health care.”

The presidentially appointed Independent Payment Advisory Board would act if Medicare spending exceeded pre-set targets. Its recommendations would take effect automatically unless overridden by Congress. The White House insists the board is legally prohibited from making recommendations that would ration care. But Republicans, who are vowing to repeal the law, have said rationing would be the practical effect.

Romney and Ryan have not offered specifics for restraining the growth of Medicare spending. Ryan contended in his speech that market competition — with 50 million seniors shopping for care — would keep costs in check.

One week into his vice presidential campaign, Ryan made his initial visit to Florida, site of this month’s Republican nominating convention. The rally took place at The Villages, a hotbed of Republican retirees, where residents were encouraged to arrive in their golf carts for the steamy morning event.

Hundreds of supporters jammed into one of the development’s “town squares,” where free entertainment and nightly happy-hour dances helped earn this community of 60,000 seniors a somewhat double-edged reputation as the Disney World of the Cialis set. Open-air bars at the Ryan event began pouring before 8 a.m., with 14-ounce margaritas going for $2.75. A Chick-fil-A stand did a brisker business, however.

Privately held, and tightly controlled, The Villages retirement complex is a regular campaign stop for GOP candidates. At a rally here in January, Romney was moved to song, and his slightly off-key rendition of “America the Beautiful” became the soundtrack of an Obama attack ad against him.

Billionaire developer H. Gary Morse, whose family built The Villages on more than 30 square miles of farmland, is a co-chairman of Romney’s Florida finance committee. Along with family members and his corporation, Morse has given more than $1 million to the Romney campaign and a “super PAC” supporting him.

Obama, meanwhile, used one of Ryan’s old budget proposals to again raise the issue of Romney’s taxes during a campaign visit to another East Coast swing state.

Ryan had once suggested a plan “that would let Gov. Romney pay less than 1 percent in taxes each year,” Obama told a Windham, N.H. rally. “They have tried to sell us this trickle-down snake oil before.”