Bears’ Cutler in command in victory over Redskins 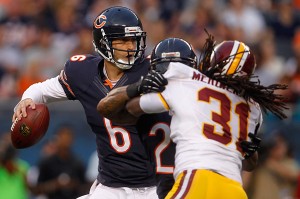 CHICAGO — Jay Cutler sat out the Bears’ first exhibition game but did not look the least bit rusty in his debut Saturday night at Soldier Field.

The quarterback was comfortable and in command of the new offense against the Redskins, setting the tone early in a 33-31 victory. Robbie Gould kicked a 57-yard field goal with 31 seconds left to win it.

Cutler, who led scoring drives on three of his four possessions, spread the ball around with his upgraded cast of wide receivers. Just as important, the Bears got the ground game going, rushing for 52 yards behind the first-team line on 13 carries to shore up the area that most concerned offensive coordinator Mike Tice last week in a lackluster loss to the Broncos. The Bears (1-1) had a commanding 17-3 lead in the second quarter when the starters were mostly done for the night.

“It was fun to get back out there,” Cutler said. “Last game it was tough to have to only watch. We had a good week of practice, I thought there was a lot more intensity and a bigger sense of urgency from the guys.”

The Bears could have some issues at safety. Starting free safety Chris Conte left in the second quarter with a right shoulder injury but appeared in good spirits, giving a thumbs-up as he walked off the field. Rookie third-round pick Brandon Hardin was carted off in the third quarter and taken to a hospital with a neck injury after he was injured tackling tight end Logan Paulsen.

The Bears are used to rapid turnover at safety, but Conte didn’t appear to be in the pain two of the Redskins’ starters were in the first quarter. Outside linebacker Brian Orakpo (shoulder) and strong safety and former Bear Brandon Meriweather (knee) both went to the locker room.

The first-string defense looked solid bottling up rookie quarterback Robert Griffin III. Israel Idonije’s sack forced a fumble that Julius Peppers recovered to set up an 8-yard touchdown run by Michael Bush, his second of the game and a clear indicator of what his role will be. Griffin completed 5 of 8 passes for 49 yards.

“We did some things (right),” Idonije said. “And we did some things we’ve got to work on. We had some opportunities to really put them in some tough spots and we let them get away. We played tough. The intensity was definitely better.”

The Bears’ passing game was crisp, as it has looked for much of training camp. Cutler completed 7 of 13 passes for 122 yards, and on the first snap he hit Brandon Marshall for a 41-yard gain behind cornerback Cedric Griffin to spark an 82-yard touchdown drive. Later, Marshall hauled in a 20-yard reception on third-and-6, and Cutler found Alshon Jeffery for a 16-yard gain to the 1 that set up Bush’s first touchdown.

Jeffery, who led the team in receptions against the Broncos, finished with three receptions for 62 yards. The more he is allowed to do, the more he impresses.

“We have a lot of guys,” Cutler said. “You bring in the second-team running back and he’s making guys miss in the hole and scoring touchdowns. We have rookie wide receivers out here playing and we have our regular guys, so we have some guys who can play. The offensive line knows it starts with them, and if they play well we’ll take care of the rest.”

The audition for a starting left tackle continued. J’Marcus Webb started and got two series before Chris Williams replaced him. They continued rotating into the fourth quarter as Tice waits for one to emerge. Webb was beaten on one Matt Forte run in the first quarter as defensive end Jarvis Jenkins went down the line to make the tackle. Williams appeared to play well.

It will be interesting to see if a full-fledged competition breaks out at left guard. Chris Spencer played poorly against the Broncos and rotated with newcomer Chilo Rachal on Saturday, similar to what happened at left tackle.

Special teams remains a work in progress, and punter Adam Podlesh was sidelined with a hip injury. The Redskins’ Brandon Banks had a 91-yard punt return for a touchdown in the second quarter. Lorenzo Booker, a long shot to make the Bears’ roster, opened the third quarter with a 105-yard kickoff return.