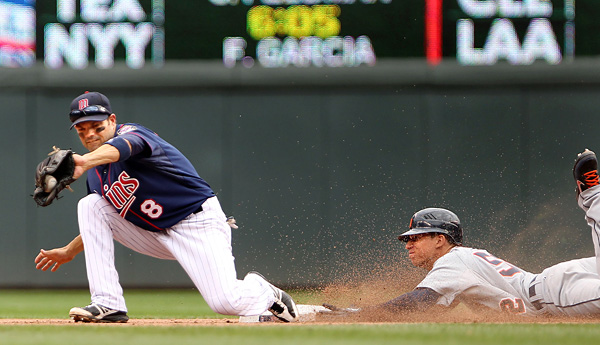 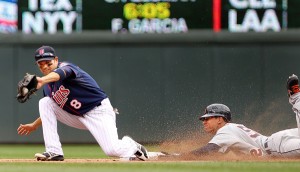 MINNEAPOLIS — Ben Revere struck out to open the bottom of the first inning Wednesday, but it took nine pitches from Tigers righthander Max Scherzer to dispose of him.

Darin Mastroianni followed with a strikeout, too. But now Scherzer had thrown 14 pitches. The Twins had seen all of Scherzer’s stuff and were ready to work counts deep and run him out of the game in the middle innings.

(PHOTO: Minnesota Twins shortstop Jamey Carroll (8) couldn’t make the out at second as the Detroit Tigers’ Quintin Berry slides in safely in the sixth inning at Target Field on Wednesday, August 15, 2012, in Minneapolis, Minnesota. The Tigers won, 5-1.)

This is the age in which the walk is a weapon, managers get squeamish about pitch counts, and teams that can grind out good at-bats usually are rewarded.

There was no payoff for being patient on Wednesday, when Detroit won, 5-1, at Target Field and Scherzer navigated through the Twins lineup with 117 pitches over seven shutout innings, tied for the third-most pitches he has thrown in a game this season.

“You’re watching and he’s got all these pitches and you expected him to start making mistakes,” Mastroianni said, “and he really didn’t leave much over the plate.”

Said manager Ron Gardenhire, “I thought we did a nice job of making (Scherzer) throw a lot of pitches, but he didn’t bury himself.”

Just when the Twins thought they had an advantage, Scherzer’s GPS kicked in. He hit 99 miles per hour with his fastball, and his other stuff was nasty, too.

Scherzer struck out 10 and took over the American League lead with 178. Whom did he knock back into second place? Teammate Justin Verlander, the reigning AL Cy Young Award winner and MVP. Scherzer also matched Verlander with a team-high 12 wins.

The Twins believed there was a window to knock Scherzer out of the game in the second and third innings. Justin Morneau and Ryan Doumit led off the second with walks. Tigers pitching coach Jeff Jones went to the mound after the count to Doumit went 2-0, as Scherzer misfired on pitches and looked agitated.

Then Scherzer fanned Trevor Plouffe with a fastball clocked at 98; Jamey Carroll swung and missed a 99-mph heater to strike out; and Alexi Casilla looked at a 95-mph fastball for strike three to end the inning. Scherzer had thrown 49 pitches through two innings.

The Twins came right back in the third when Revere singled to center. He tried to steal second, but Tigers catcher Alex Avila nailed him with an outstanding throw. It was a significant play, because Mastroianni followed with an infield single. Joe Mauer struck out an incorrectly-called strike three and let plate umpire Jim Wolf know it as he walked to the bench. Josh Willingham flied out to end what could have been a promising inning.

It also was the last time the Twins threatened against Scherzer, who started a run of 11 consecutive batters retired.

“That helped keep momentum on our side,” Scherzer said. “That allows me to have a clean inning, and it allowed our hitters momentum for the next inning, and that’s when Delmon hit the bomb.”

Delmon, of course, is former Twin Delmon Young. He hit a two-run homer to left off Twins righthander Cole De Vries in the fourth, giving Detroit a 3-0 lead and punching his old team in the gut. Miguel Cabrera, who hit an opposite-field homer in the first, added a RBI single in the fifth to make the lead 4-0.

De Vries (2-4) was removed after four innings and hasn’t won in eight starts. With Liam Hendriks pitching well at Class AAA Rochester, the Twins could decide to take another look at him if De Vries continues to struggle.

Twins hitters on Wednesday believed they were set up for a good offensive day, but they ended up tipping their caps to Scherzer.

“He’s got great stuff,” Morneau said, “and sometimes it is hard to settle in on guys when they are misfiring under the chin and then put the next one on the black.”