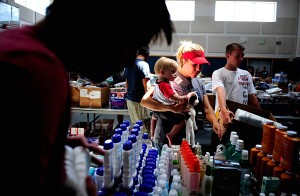 LAKEWOOD, Colo. — Miles from any flames, on the fourth floor of an office building in the Denver suburbs, the central nervous system in the fight against the West’s wildfires hums along.

The Rocky Mountain Area Coordination Center is the invisible hand in the fight against the fires — its tidy cubicles of ringing phones, computer screens, dry-erase boards and fire maps the logistical hub that is dedicated to quickly deploying thousands of firefighters, engines, aircraft and supplies around a five-state region plagued by destructive blazes.

(PHOTO: Volunteer Esther Fleece carries her friend’s child, Nolan, through rows of relief supplies at the New Life Church in Colorado Springs, Colorado, Saturday, June 30, 2012. Gleaning for the World, an organization based out of Concord, Virginia, donated four semi-trailers worth of supplies towards the Waldo Canyon fire relief efforts.)

With more than a dozen major fires burning in the area during a hot, dry summer, the staff dispatchers, meteorologists and fire intelligence gatherers are busy like never before, working around the clock to anticipate where the next big blaze might break out.

“We haven’t been at this demand in a long time, if ever,” said center manager Jim Fletcher of the U.S. Forest Service. The staff has nearly tripled this summer, to more than 30 people. And though they work far from the fire lines, “it’s through our processes and systems that we get the boots to the field,” he said.

Fletcher, wearing a polo shirt, with a baseball cap low on his head, spoke slowly and deliberately, worn out from a 14-day streak of long hours. Foremost on his mind are the spate of fires continuing to burn across Colorado. More than 25 percent of the nation’s firefighting resources are deployed in the state, according to the National Interagency Fire Center.

Containment of the Waldo Canyon fire in Colorado Springs, which has destroyed an estimated 346 homes and killed two people, has inched up in recent days and stood at 45 percent on Saturday evening.

The blaze, which erupted June 23 to become the most destructive in state history, continued to burn in a 26-square-mile expanse of mountains near Colorado’s second-largest city, but was not growing, authorities said.

“We’re cautiously optimistic but more worried about areas where we could have mistakes,” Incident Commander Rich Harvey said at a news conference.

Two-thirds of the 32,000 people forced to evacuate had been allowed to return to their homes.

Investigators haven’t been able to access the area where the fire broke out to determine the cause.

Until this week, the High Park fire west of Fort Collins ranked as the most destructive in Colorado history, having destroyed 259 homes. That fire was 97 percent contained on Saturday.

As weather patterns shift in the coming weeks, forecasters at the logistics center in Lakewood expect additional fires farther north as the mountains and grasslands of Wyoming and western Colorado dry out and heat up.

Already, a poster of a forest inferno that commemorates Colorado’s horrific 2002 wildfire season has been updated with a sticky note that reads “2012.”

“Hot and dry and an ignition equals fire, I guess,” Fletcher said. “The fuels have been dry for long enough that they’ve burned at an extreme rate.”

Predictions made here, which pinpoint dry conditions or lightning strikes, have in some instances allowed dispatchers to move firefighters to problem areas to attack fires before they’ve had a chance to spread.

In recent days, glimpses of moisture have raised hopes here that the worst of the fires could be over for areas including Colorado’s heavily populated urban corridor along the Front Range. But Fletcher isn’t declaring victory just yet.

“Until it rains here and the conditions have subsided, I just always go with the assumption it’s going to get worse,” he said. “We want to believe and have faith in our predictive services, but until it’s over it’s not quite over.”