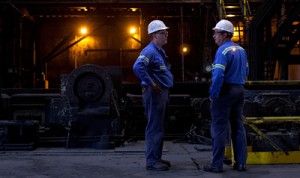 The Fontana steel maker needs experienced electrical and mechanical technicians to help it make metal pipes and flat-roll sheets used in construction projects. The pay is good. An industrial maintenance mechanic can make $64,000 a year plus health benefits. In good years, company profit-sharing can boost pay by $5,000.

While these workers don’t need college degrees, they need at least two years of specialized training plus strong math, reading and writing skills. The plant is loud and filled with heavy machinery. And because the facility operates 24 hours a day, workers must rotate shifts, making it even harder to recruit, said Brett Guge, executive vice president of finance and administration.

“It’s been a chronic problem for many years,” Guge said. “You would think it’d be somewhat easier in this economy.”

There’s no doubt that the nation’s sluggish labor market continues to favor employers, many of whom are holding back on hiring amid global uncertainty. In May, the national unemployment rate increased to 8.2 percent from 8.1 percent the previous month. Millions of U.S. workers have been jobless for so long that they’ve exhausted their unemployment benefits.

Still, companies in some industries or certain parts of the country are having difficulty finding workers. Tighter immigration enforcement has squeezed the nation’s agricultural sector as farmers from Washington state to Georgia scramble to find enough field hands. Thinly populated North Dakota is so desperate for bodies to keep its oil boom going that the state’s governor has pleaded publicly for out-of-state workers to relocate there.

In California, where the April unemployment rate was 10.9 percent, some renewable energy firms are searching hard for qualified engineers. So are technology companies in Silicon Valley, where the rush to produce next-generation mobile and tablet technologies has sparked bidding wars for top candidates, who can fetch starting salaries from $85,000 to $100,000.

Even firms that aren’t designing the next iPhone are struggling. In a recently released study by recruiting firm ManpowerGroup, nearly half of U.S. employers surveyed said they’re having trouble filling key jobs despite continued high unemployment.

Some economists are skeptical about all that griping. Adjusted for inflation, incomes for most Americans have been stagnant for years. The recent downturn has given workers even less leverage to demand better pay. Many companies complaining of a “shortage” of talent simply don’t want to pay more to get it, said Andy Sum, director of the Center for Labor Market Studies at Northeastern University.

“There are some spot shortages,” he said. “But the norm for the country, though, is a massive (labor) surplus. I’ve never seen a surplus this large.”

Still, Sum agreed with Manpower’s findings that some high-skill positions in information technology and engineering are hard to fill. Ditto for skilled trades, which include jobs such as heavy-equipment operators, electricians, welders and sheet-metal workers.

Many of those blue-collar workers are starting to retire and won’t be easily replaced, said Stanley Stossel, senior assistant business manager for the International Brotherhood of Electrical Workers, Local 47, in Diamond Bar.

“In some ways, the economic downturn staved off the tsunami,” Stossel said. “A lot of people were working a few years longer than they had planned on.”

Machinists and machine operators are also hard to find. Manufacturing has been a bright spot in a slow recovery, adding almost half a million jobs nationwide since January 2010.

The average hourly wage for a manufacturing job is $23.96, according to the Bureau of Labor Statistics. And some positions pay upward of $31 an hour. Still, experts said a manufacturing career isn’t even on the radar of many U.S. workers. Years of layoffs and outsourcing of factory jobs to foreign countries have convinced some that there’s no future in it. Others are attracted to white-collar work and sexier industries such as technology.

To cope, some firms are beefing up the skills of current employees or partnering with nonprofits and community colleges to train students for blue-collar jobs.

California Steel Industries, for example, launched a paid internship program this summer with Chaffey College in nearby Rancho Cucamonga. Nine electrical technician interns have been hired so far, Guge said.

Oil refineries in the South Bay have taken similar steps. Exxon Mobil Corp. and ConocoPhillips are among the companies working with the nonprofit South Bay Center for Counseling to train process operators and instrument technicians to monitor refinery operations.

Graduate Joseph Morales, 24, recently started a job with Marchem Technologies, a Long Beach chemical plant. He’s making $17 and hour to start, with the prospect of more raises ahead. According to the Bureau of Labor Statistics, chemical plant operators earn an average of $27.23 an hour.

“I wanted something more stable,” said Morales, whose last job was selling sporting goods on commission.

In Silicon Valley, the hunt for workers with skills in mobile software and user-focused applications has gotten so competitive that some companies have resorted to offbeat recruiting strategies.

Quixey, a Palo Alto company that has built a search engine for mobile apps, created a monthly contest to appeal to game-loving techies. Programmers are invited to solve a bug in a 10-line piece of computer code in 60 seconds. Winners get $100, a sweat shirt—and a follow-up recruitment email.

The 25-person firm has hired four full-time engineers and three interns through the challenge.

“Quixey Challenge is more effective than anything else in beginning the pipeline of engineers,” Shapira said.”It appeals to what engineers like to do.”