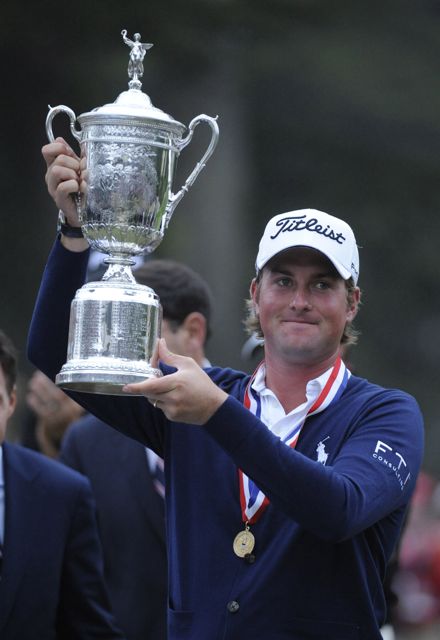 By Jeff Shain, The Orlando Sentinel –

The North Carolina native, who found himself six shots behind Furyk after five holes, stormed back with four birdies over the next five holes, then rattled off eight pars for a 2-under-par 68 that was good for a one-stroke triumph.

(PHOTO: Webb Simpson of the United States celebrates after winning the 2012 U.S. Open at The Olympic Club in San Francisco, California, Sunday, June 17, 2012.)

“It was just a cool day,” Simpson said as he waited for Furyk to play his final hole. “I had a peace all day. I knew it was going to be a tough day – I probably prayed more the last three holes than I’ve ever done in my life.”

He got crucial answers on each of the final two. Simpson saved par from a greenside bunker at Olympic’s par-5 17th hole, then lofted a delicate chip from the rough alongside the 18th green that rolled downhill and came to rest 3 feet from the flagstick.

He dribbled the par save home, leaving him at 1-over 281 for the championship. Then it was a matter of waiting out the final group, where Furyk’s steady game was starting to unravel over the back nine.

A bogey at the par-3 13th dropped the 2003 Open champion alongside Simpson for the top spot. Three holes later came a swing that ultimately sealed his fate.

Even though he eschewed driver off the tee, Furyk unleashed a hard snap hook that went deep into the left rough. His only choice was to chip back out to the fairway, and he was unable to save par.

Furyk also found birdies elusive on the final two holes, watching his approach at No.18 drop into a greenside bunker. He skulled that shot across the green into another bunker, eventually finishing with a birdie-less XX.

The finish was fell right into the Open’s usual playbook at Olympic, where giant-killers now have knocked off their more-established rivals in all five editions. Simpson joins the Olympic champions’ roll call of Jack Fleck (1955), Billy Casper (1966), Scott Simpson (1987) and Lee Janzen (1998).

Tiger Woods, seemingly in line to make a run at his first major title since 2008, never was a factor. Two bogeys and a double bogey in his first three holes eradicated any hopes of catching up to the lead, finishing with a 73.

“The first six, I just didn’t play well at all,” Woods said. “I just could never get anything going positively and I missed the ball on the wrong side a couple times. That’s all it takes.”

Woods now will have gone a full four years since his last major title – the epic 2008 Open at Torrey Pines, where he outlasted Rocco Mediate in a 19-hole Monday playoff.

Lee Westwood, who began Sunday three shots off the pace, also was a victim of Olympic’s gremlins when his drive at the par-4 fifth hole rattled in a cypress tree and never came down.

It was reminiscent of Janzen’s final-round drive at the very same hole – except that Janzen’s ball shook loose from a gust of wind, and he wound up chipping in to save par. Westwood took double bogey that dropped him from contention.