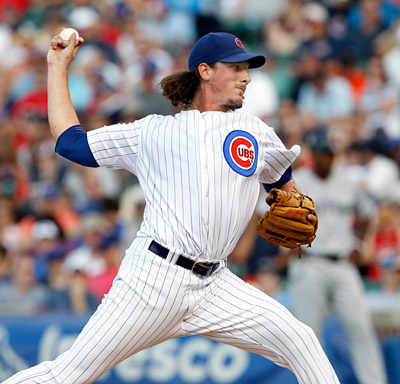 CHICAGO — The Cubs know what they have in Jeff Samardzija — a possible franchise pitcher — and they’re taking no chances of ruining him before he gets there.

Samardzija’s conversion from reliever to starter was planned carefully over the winter and is re-examined every outing with the idea of getting him through a season of starts without over-taxing his arm.

“We’re obviously not going to put him in situations he never has been in in his career,” manager Dale Sveum said. “You don’t want to completely abuse a guy the first time he has started.”

Samardzija (5-5) has won only once in his last six starts after Saturday’s 4-3 loss to the Red Sox, although it appears the lack of offense hurts him more than arm fatigue.

“I’m actually feeling stronger than I did in the beginning,” he said. “My arm feels great. I just need to get ahead of the hitters a little more.”

Samardzija has pitched 78 innings in 13 starts this season. Last year he threw 88 innings and the year before 130.

That’s a long way from the 200-plus most teams expect from their starters, especially someone as big and strong as Samardzija.

So how many innings are enough and will that be enough to keep him from being shut down in September?

“We have a number in mind,” pitching coach Chris Bosio said. “I would say right now he is real close to being right on track.

“If he can, he’ll go the whole season. He works hard. He’s talented. Like a lot of your young players, he’s still learning the game. But he’s definitely one we’re watching closely.”

Samardzija says he is strong enough to keep starting.

“All I can do is pitch when they tell me to pitch,” he said. “I understand they have a plan for me. I’d like to pitch every fifth day, no matter what. I can physically do it. But it’s not my call.”

On Saturday against the Red Sox, things went well for Samardzija until the fourth inning when David Ortiz doubled and Jarrod Saltalamacchia homered in his first game as cleanup hitter.

The Red Sox also scored a run off Samardzija in the sixth inning after he walked Ortiz and Saltalamacchia and Will Middlebrooks greeted reliever Randy Wells with a single.

While it came after Samardzija had departed, Luis Valbuena collected his first hit as a Cub with a three-run seventh inning homer, but by then Wells already had given up the fourth run.

As for Samardzija, he will keep pitching, although the Cubs will try to hold down his starts by giving him an extra day on scheduled off-days and occasionally skipping his turn.

“We try to keep track of every warmup pitch, every side session, everything,” Bosio said. “It’s all documented.”