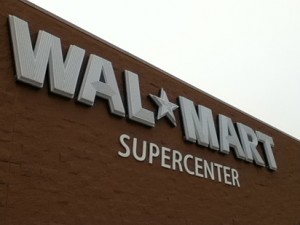 MINNEAPOLIS — Best Buy Co. Inc.’s plans to close 50 big-box stores by the end of the year is creating, at least temporarily, a consumer electronics hole that Wal-Mart Stores Inc. is eager to fill.

The Bentonville, Ark.-based retail giant has taken out full page newspaper ads, including in the Star Tribune of Minneapolis, urging shoppers to patronize Wal-Mart stores in markets where Best Buy stores will soon shut down.

“Did your local Best Buy just close?” the ad asks in large letters. “We have the top brands and low prices.”

Neither Best Buy nor Wal-Mart responded to requests for comment.

Faced with weak sales growth, Best Buy said earlier this year that it seeks to save $800 million over three years by shutting down stores and laying off thousands of employees. The Richfield, Minn.-based company said it wants to reinvest that money into building smaller-format Best Buy Mobile stores and experimental “Connected Stores” that resemble Apple stores.

Wal-Mart, however, sees this as a way to grow its footprint, said Carol Spieckerman, president of retail consulting firm Newmarketbuilders.

The ads “are a smart tactic,” Spieckerman said. For Wal-Mart, “there is a significant opportunity to win business away.”

For one thing, Best Buy lacks the same concentration of stores that Wal-Mart enjoys, she said. “So if a Best Buy store goes away, it creates a huge vacuum for many, many miles.”

The consumer electronics giant faces a dilemma of sorts. In the long run, Best Buy needs to rid itself of unproductive retail space, analysts say. But in the meantime, Best Buy might see customers permanently defect to competitors like Wal-Mart as it shuts down big boxes and opens smaller format stores.

Best Buy is running tests in Minnesota and Texas to gauge customer reaction to store closings, especially in the Minneapolis-St. Paul area, where Best Buy plans to eliminate about 18 to 20 percent of its retail space. In a recent conference call with analysts, Chief Financial Officer James Muehlbauer expressed confidence that Best Buy customers will stick around.

“We think based on the geography and the density in the Minneapolis and St. Paul market, we have an opportunity to actually get quite a high level of customer retention, which makes the economics work very, very well,” Muehlbauer said. “I think as we learn how that process works and we learn what customer behavior is, we’ll have a more informed view with how that might play out in different markets.”

But Wal-Mart is hardly standing pat. The retailer has historically been willing to aggressively cut prices to win market share.

And it has also perfected the art of targeted, local marketing, Spieckerman said. For example, Wal-Mart recently bought radio ads challenging grocer Cub Foods in the Minneapolis-St. Paul area. With its “Wal-Mart Challenge,” the retailer wants consumers to bring their receipt from Cub Foods, buy the same items at Wal-Mart, and compare prices.