Golden Gate Bridge gets a light show for 75th birthday 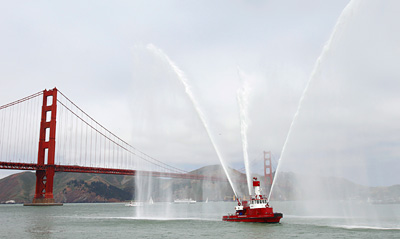 LOS ANGELES — The Golden Gate Bridge is getting a little sparkle for its 75th birthday.

On Sunday, remotely operated mirrors on top of the bridge’s towers began flashing narrow beams of reflected sunlight all around the San Francisco Bay in an installation that marries art and science.

“We love our view of the bridge. We’ve always wanted to enhance it with a little sparkle,” said astrophysicist John Vallerga, whose offices at the University of California, Berkeley’s Space Sciences Laboratory in the Berkeley Hills overlook the bay.

(PHOTO: A San Francisco Fire Department boat sprays water in the air before the arrival of the aircraft carrier the USS Nimitz on Sunday, May 27, 2012, in San Francisco, California.)

Members of the public will eventually be able to arrange their own brief performance by going to the installation’s website and scheduling a time and place for the beam to shine.

Part of the bridge’s yearlong birthday celebration, the project, called Solar Beacon, will remain in place until Aug. 30.

Bridge workers on Friday installed one of two sets of mirrors, or heliostats, atop each of the bridge’s two 746-foot towers. The heliostats, about two feet across, are swiveled and tilted by motors directed by cellphone commands.

“It’s art in progress. It’s never been done before, and we don’t know what it’s going to look like,” said Vallerga, who is executing the project with a group of volunteers.

Normally he builds instruments for astronomical spacecraft, including ones bound for Pluto and Jupiter. That work, he added, is “very utilitarian. It’s not often we can appreciate its artistic value. This is a little bit different.”

The heliostat concept originated in 2005 when Vallerga and colleague Pat Jelinsky approached an artist-in-residence at the space lab, Liliane Lijn of London. They came up with an idea for prism heliostats that would convert sunlight into refracted rainbow colors beamed from a hilltop.

They were eyeing Los Angeles, either in the Hollywood Hills or near the Griffith Observatory, as a location. Unable to drum up enough local support, they are now planning their solar hill for a mountain ridge in France.