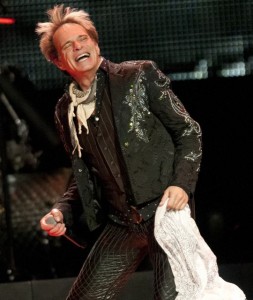 LOS ANGELES — Van Halen will be back, lead singer David Lee Roth promises, and when the band returns, it may be bringing along some extra heavy machinery.

In a video the band has posted, it doesn’t appear that Roth is using one of his colorful rock ‘n’ roll metaphors when he tells fans to expect a “super-sized monster-truck rally Van Halen tractor-pull sort-of-event” when the band eventually reschedules its 30-plus postponed tour dates. No clue as to what that means, but he says it will happen as “soon as the band learns to speak Australian.”

(PHOTO: David Lee Roth of Van Halen performed at the Xcel Energy Center in St. Paul, Minnesota, on Saturday, May 19, 2012.)

“We’re going to be bringing that back around through the United States,” Roth says in the video, which he said was filmed in the woods just north of Minneapolis-St. Paul. The reformed ‘70s hard-rock heavyweights will return home to Los Angeles with a June 1 show at Staples Center, one of the dates that wasn’t unexpectedly taken off the tour docket last week.

Contrary to rumors that the famously volatile band isn’t getting along, Roth said Van Halen is simply attempting to avoid exhaustion. “We bit off way more than we could chew, when it came to scheduling,” Roth said. “The band is winning, but our schedule has been sidelined for unnecessary roughness.”

The postponements came just one month after the band added nearly 20 dates to its Live Nation-produced trek. The promoter declined to comment on the cancellations, and Roth offered no hint as to when the canceled dates would be rescheduled, adding only that the band intends to be on tour for two years. Roth said that axing the dates will prevent the reunion from becoming “the robot zombie tour.”

On the other hand, Roth gave an open-hearted embrace to all those who would like to bring in recording devices to the band’s gigs. “We’re one of the few bands who relishes you bringing in whatever camera. If you can carry it in, and pull the trigger on it yourself, then please do.”