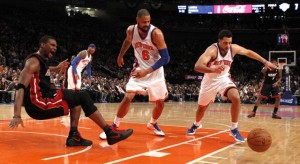 NEW YORK — The Miami Heat had the opportunity to give themselves a week off.

Instead, they took most of Sunday off.

And appeared significantly off with their late-game thinking.

(PHOTO: The Miam Heat’s Chris Bosh, left, falls after losing the ball to the New York Knicks’ Tyson Chandler in the first quarter of Game 4 of the NBA Eastern Conference Quarterfinals at Madison Square Garden in New York City, Sunday, May 6, 2012. The Knicks defeated the Heat, 89-87.)

Dreary for extended stretches and then seemingly brain-locked at the finish, the Heat came up short in an 89-87 loss to the New York Knicks at Madison Square Garden, failing to complete a sweep of this best-of-seven opening-round NBA playoff series.

“It is not ideal, but it is the deal,” Miami coach Erik Spoelstra said. “You have to give New York credit, and we have to go home and regroup.”

With the Heat up 3-1, Game 5 is Wednesday at 7 p.m. at AmericanAirlines Arena, with tickets going on sale Monday.

It was a game that left itself open for second-guessing from a Heat perspective, with Spoelstra electing to utilize Shane Battier defensively in a small lineup on Carmelo Anthony for the decisive stretches of Anthony’s 41-point performance, and then LeBron James left standing in the left corner on the game’s final sequence, one that resulted in an off-balance Dwyane Wade 3-point attempt from the right corner just before the final buzzer.

And so, it was back to the pre-LeBron days, with Wade trying to do it on his own.

“I lost the ball and didn’t get the shot I wanted,” Wade said.

James said he agreed with the call of Wade running a pick-and-roll with Chris Bosh to get a mismatch against Knicks forward Amare Stoudemire.

“He had a good look, initially,” James said.

But James added, “For me, personally, I would have loved to have the ball.”

When it came to the defensive choice against Anthony, Spoelstra elected to close with James defensively on Knicks center Tyson Chandler, with Bosh defending Stoudemire. That left Battier on Anthony, with Spoelstra only saying he preferred to go with a small lineup.

“We still had enough opportunities to win this game, regardless of who was guarding who,” Spoelstra said.

James agreed, to a degree.

“It was the matchups we had at the time,” James said. “That matchup has worked for us. It doesn’t matter who’s on who when a great player has it going offensively.”

James had consistently offered the best defense against Anthony in this series.

The victory snapped the Knicks’ 13-game playoff losing streak, their first postseason victory since 2001, and prevented the Heat from completing their first sweep since the second round in 2005 against the Washington Wizards.

“Now we’ve got this monkey off our back and we’re still playing,” Knicks coach Mike Woodson said.

The Heat went in aware that a second-round series against the winner of the series between the Orlando Magic and Indiana Pacers, which Indiana leads 3-1, would not begin until next Sunday at the earliest.

As it is, more work remains against Anthony and the increasingly debilitated Knicks.

On an afternoon the Knicks got Stoudemire back from his post-Game 2 hand injury, they lost starting point guard Baron Davis in the third quarter with a dislocated right kneecap, increasing the possibility of a Game 5 appearance by rookie phenom Jeremy Lin, who has been out a month after knee surgery.

Anthony was supported by 20 points and 10 rebounds from Stoudemire.

The box score said plenty about the Heat’s struggles, from 3-of-19 3-point shooting to 11 missed free throws to the bench contributing just nine points on 3-of-9 shooting.

But when Anthony needed to step up, he stepped up with a huge late 3-pointer over Battier.

It was a bizarre finish, fueled in part by a key 3-pointer by former Heat point guard Mike Bibby.

“I kind of expect that from him,” Woodson said of Bibby, who he coached with the Atlanta Hawks.

No NBA team has ever recovered from an 0-3 deficit to win a best-of-seven playoff series.