May Day protesters smash windows, clash with police in Seattle 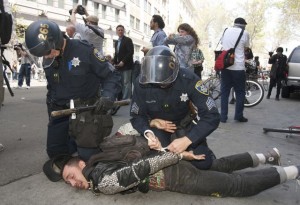 SEATTLE — Wind and rain began driving a few May Day protesters away Tuesday evening, hours after a cluster of about 75 demonstrators dressed in black and carrying poles interrupted peaceful marches to smash windows and clash with police in Seattle’s downtown retail core.

Swarms of police on bikes and in riot gear had attempted to corral the early afternoon demonstrators with batons and chemical spray, but the protesters quickly dispersed. Some reintegrated into the crowd, shedding their black clothes, Mayor Mike McGinn said at a news conference, and by early evening there had been only eight arrests.

(PHOTO: Police arrest a protester during May Day demonstrations in downtown Oakland, California, on Tuesday, May 1, 2012.)

But by evening, the protests had swelled to thousands of people; the vast majority remained peaceful.

After the early afternoon violence, McGinn issued an emergency order banning items that could be used as weapons, and authorized police to pre-emptively seize the 5-foot poles demonstrators used.

“My direction to the police is that I expect them to respond to lawbreaking swiftly and aggressively,” McGinn said.

The spasm of violence began at 12:35 p.m. and initially lasted less than 30 minutes, with vandals, some associated with Black Bloc, marching from Westlake Park, smashing windows and setting off sound bombs and fireworks. The demonstrators also shot paintballs and set a small fire at the U.S. Court of Appeals at Fifth Avenue and Seneca Street.

The group moved up Sixth Avenue, breaking windows at four banks — Wells Fargo, HSBC, Home Street Bank and Bank of America — and vandalizing retail stores, including NikeTown and American Apparel next door. Fidelity Investments at Sixth Avenue and Pike Street was tagged with graffiti. Car windows were also smashed, and a Porsche Cayenne was tagged in spray paint with a green anarchist’s symbol.

When the vandals dispersed, some of them changed into street clothes and blending into a rally at Westlake Park.

The protests remained mostly peaceful until a brief late afternoon flare-up, when at least one protester threw a bottle at police and a few others were arrested. By the time the evening commute began to taper off, the largely peaceful crowds had begun to taper off, too.

“When they move quickly and disperse rapidly and hit multiple points, it’s hard for the police to respond,” McGinn said.

Eight people have been arrested, according to Seattle police.

McGinn said most protesters have been peaceful.

McGinn said the order was necessary to ensure safety at the 5 p.m. march that started at Judkins Park in support of immigrant rights.

Kathleen Taylor, executive director of the American Civil Liberties Union of Washington, said the mayor’s executive order appeared to be drawn narrowly enough that it “seems reasonable.” But, she said, application of the order by police will be the real test.

The “anti-capitalist” march was intended to coincide with a citywide general strike. Most of the march, which ended with speeches and a hip-hop performance at Westlake Park, was peaceful.

Liam Wright said the march was an anti-capitalist protest. He led the crowd in a chant: “When the people of the world are under attack, what do we do? Stand up, fight back!”

The May Day protests coincided with marches and called general strikes in other cities, including New York and Detroit. In Portland, Ore., police also clashed with black-clad demonstrators.

Lisa Marcus, carrying a bucket of tulips and lilacs on her bicycle, handed out leaflets opposing oil extraction from the Alberta, Canada, tar sands.

At Seattle Central Community College, where the march to Westlake Park started after 11 a.m., Michael Pham, vice president for administrative services, said the rally there didn’t disrupt classes. The marchers were a mix of students and others.

Seattle police had been on alert for violence, and McGinn’s office issued a news release Friday warning that protesters may have been training to hide weapons and how to target police officers on horseback.

The main U.S. District courthouse in Seattle was on “heightened security,” and there had been no attempts to vandalize it. The U.S. Marshal’s office offered to help Seattle police, and Federal Protective Services, which oversees security at the various federal offices in western Washington, also was on alert.

David Madden, public information officer for the 9th U.S. Circuit Court of Appeals in San Francisco, said a group of protesters marched up Madison Avenue, and as they turned onto the Sixth Avenue side of the William Kenzo Nakamura U.S. Courthouse in Seattle, “all hell broke loose.”

Glass doors at the entrance were shattered and lower-level windows broken, Madden said. Multicolored stains were left on the ceramic tiles on the exterior of the building, he said.

Someone tried to ignite an incendiary device constructed from an orange-juice container, but it apparently didn’t go off, Madden said.

The courthouse is used by Court of Appeals judges and at least one judge, Richard Tallman, was in the building at the time, Madden said. The FBI and other agencies also have offices in the building, he said.

No one was injured, and guards locked the door before anyone could get inside, he said.

At the Washington Athletic Club building at Sixth and Union, protesters had smashed a large plate-glass window that was part of the HSBC branch.

Across the street at the 2 Union Square building, in an empty for-lease office space, there was a 6-inch hole in a plate-glass window. A security guard pointed to a rock inside the building that had been thrown through it.

All five downtown Wells Fargo branches, including one where glass windows were broken, closed for the day at 12:30 p.m. as a pre-emptive measure, said Lara Underhill, a Wells Fargo spokeswoman.

“We didn’t know what to expect and wanted to ensure the safety of our team members and customers,” Underhill said.