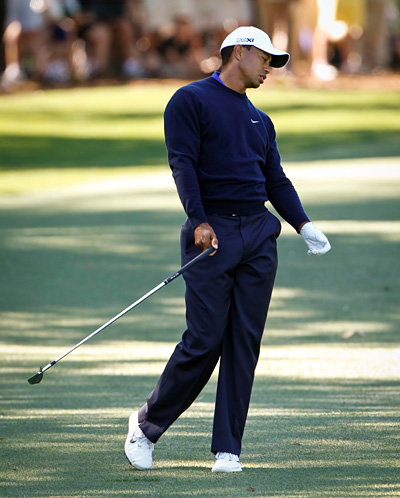 AUGUSTA, Ga. — Phil Mickelson and Tiger Woods still like their chances to win the 76th Masters.

Based on his play on the back nine at Augusta National on Friday, it would appear Mickelson has a real shot.

Based on his play for a second consecutive day, it would appear Woods is a long shot.

Mickelson, a three-time Masters champion, birdied four of the last seven holes, rebounded from his opening 74 with a 68 and was at 2-under-par 142, just three shots behind co-leaders Jason Dufner and Fred Couples.

“I played well and shot something in the 60s,” Mickelson said. “I was hoping for one or two more under, but that birdie on 18 felt terrific to finish that way. And to be only three back heading into the weekend feels great, too.”

Woods, a four-time Masters champion, struggled with all parts of his game but especially his putting. He shot a 75 and was at 3-over 147.

“I just tried to give it everything I had on each and every shot, tried to stay focused and put the next shot where I wanted to put it,” he said. “That wasn’t the case most of the time, but I was grinding hard.”

Woods hit a handful of errant tee shots and missed several short putts. After getting off to a fast start with birdies on Nos. 1 and 3, he bogeyed five of the last 15 holes.

He trailed the leaders by eight shots going into the weekend.

“Guys have won this tournament from five and six back going into the back nine (on Sunday),” Woods said. “I just need to cut that (deficit) down a little tomorrow, play a good, solid round and get off to a quick start Sunday, like I did last year.”

The fire within: Steve Stricker disagreed with Johnny Miller, who suggested Thursday on the Golf Channel that Stricker was too nice to win a major championship.

“Well, you know, I don’t think niceness has anything to do with it,” Stricker said. “I’m a competitor on the inside. I try to be nice. Sometimes I’m not nice on the golf course. I beat up myself and a caddie here and there, too.

“Off the course, I try to be as nice as I can. But I compete as hard as I can on the course. I don’t know. I’ve won tournaments and I feel like I can compete on a high level.

“He’s entitled to his opinion, but I think I’m a pretty big competitor on the inside. I want to beat the other guy just as bad but then when we’re done I can have fun with the guys, too.”

Fifth time’s the charm: Martin Kaymer of Germany, who won the 2010 PGA Championship at Whistling Straits, finally made the cut at the Masters in his fifth attempt.

He wasn’t happy with his second-round 75, however, especially after hitting 13 of 14 fairways and 15 of 18 greens in regulation.

He needed 37 putts, the highest total of the 94 players in the field.

“I played really, really good golf,” Kaymer said. “In terms of ball-striking, the golf ball is no problem. I just need to be a little more brave with my putts.”

Playing through: Something happened Friday that rarely happens in a major championship: One group let another play through.

Scott Verplank, Sean O’Hair and Gonzalo Fernandez-Castano were first off the tee at 6:50 a.m. Following them was the twosome of Chez Reavie and Martin Laird. Mark O’Meara would have been the third member of the group but withdrew with an injury before the start of the first round.

Verplank, O’Hair and Fernandez-Castano waved Reavie and Laird through on the fourth hole.

“I felt like they probably should have had them tee off first since they were a twosome,” O’Hair said. “I just figured why not ask, because those guys were waiting for us on every shot (Thursday) and I didn’t want to make them wait again. It was just more of a courtesy thing than anything.”

Kraft plays on: Kelly Kraft, who won the 2011 U.S. Amateur at Erin Hills, made a nice putt to save bogey on No. 18 and survived to play on the weekend.

Chip shots: Sergio Garcia was happy to oblige when a reporter asked about an injury to his middle finger. Garcia has had problems with a cut reopening near the fingernail. When asked which finger it was, he smiled and made what would otherwise be construed as an obscene gesture.

Larry Mize, 53, missed the cut on the 25th anniversary of his stunning playoff chip-in to beat Greg Norman in the 1987 Masters. “Time does fly,” Mize said. “The older you get, the faster it goes, too.”

Jason Day, who tied for second place at the 2011 Masters, withdrew with an injury to his left foot after playing seven holes.

Clair Peterson, tournament director of the John Deere Classic and a Wisconsin native, was in the gallery watching Stricker. Peterson had a rooting interest: Stricker is the three-time defending JDC champion.

John Counsell, Craig Counsell’s father and the former marketing director of the Greater Milwaukee Open, also was in the gallery.