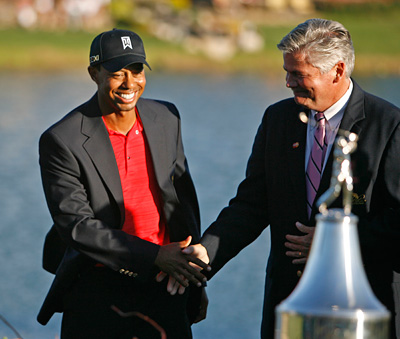 By George Diaz, The Orlando Sentinel –

Tiger crawled his way back defiantly through a marriage that unraveled, the humiliation, the shame, the jokes on Letterman and Leno, and the physical sting of various injuries.

One of the most iconic sports figures on the planet proved his resiliency, and bounced back after 30 months of controversial chatter to win the Arnold Palmer Invitational at Bay Hill.

Tell us how you feel Tiger:

Earlier, he did acknowledge that “it was pure joy,” oddly showing no emotion when he was saying those words.

Introspection isn’t in Tiger’s golf bag. Never has been.

It’s not a felony; not even a misdemeanor, to share candid thoughts.

But you would think that maybe once, Tiger would let the iron curtain down, just to let us take a peek.

Instead, Tiger led the media through a monotonous 10-minute Q&A, the most engaging point coming when he challenged a media member who asked him how to address critics who said that “you may never win again.”

“Well, it’s my second win,” Tiger said, bringing up the inconsequential Chevron World Challenge in December 2011, which is a slight upgrade from winning a Pro-Am event at Dubsdread.

That’s the odd deal with Tiger, and why his appeal is 99 percent game and 1 percent graciousness.

He can’t even embrace an ‘attaboy.’

Frankly, most of the world has gotten past Tiger’s sexual indiscretions. America is great at forgiving and forgetting, as Woods found out Sunday as an army close to 1,000 strong followed him to the 18th green to celebrate the long road back.

“What you do at work is one thing and what you do outside of work is another,” said Stanya Taylor of Irvine, Calif., who happened to be in Central Florida on business. “This is his game. This is his life, and I’m glad.”

There might be a few folks still stuck on the mortality play angle, but I didn’t hear or see any Sunday afternoon. They were there to celebrate Tiger’s greatness, and he didn’t disappoint.

He began the day with a one stroke lead over Graeme McDowell. Tiger tripled that in a hurry after McDowell bounced into bunkers twice for a double-bogey. From then on, there was rarely any pressure on Tiger but to hold serve on a windy day. He shot a 2-under par 70 to win by 5 strokes, doing as he usually does — closing on Sundays. This marked the 48th time in 52 PGA tour events that Tiger has held onto a lead on Sunday.

Tiger did set the I-Robot personality free briefly, when he said “[bleeping3/8 yeah!” to caddy Joe LaCava as they approached the 18th green.

After a par putt on 18, he punched LaCava’s chest, and tipped his Nike cap to the crowd chanting “Ti-ger!” “Ti-ger!”

Perhaps the presence of golf’s greatest ambassador, Arnold Palmer, might have allowed Tiger to embrace the moment, but Palmer had to be rushed to a local hospital because of high blood pressure. He was to stay overnight as a precautionary measure.

Seven victories at Bay Hill is a great thing. Breaking a 923-day drought on the PGA tour is fabulous.

So is shooting under par in all four rounds since he returned to play after the Thanksgiving meltdown in the 2010 Masters.

Winning a tournament two weeks before the Masters will surely generate a huge buzz.

Tiger is back baby!

We expected an exclamation mark from the man. Exuberance. Excitement.

All we got was exasperation. Ours.

The Least Interesting Man on the Planet is back in business.