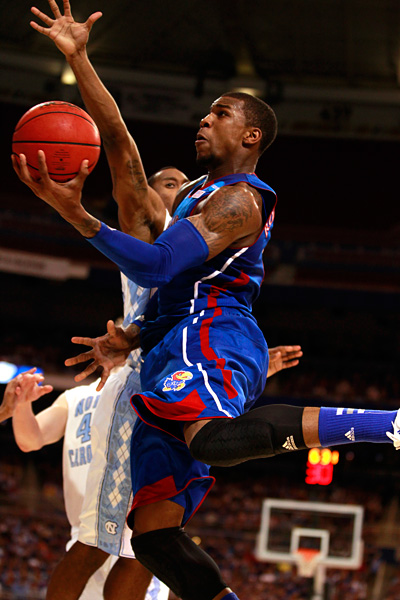 ST. LOUIS — Tyshawn Taylor still hasn’t made a three-point shot in a domed stadium during the NCAA Tournament. He’s 0 for 17. And if you think he gives a hoot, then there’s nothing in your dome.

(PHOTO: Kansas’s Thomas Robinson (0) drives to the basket during the first half against North Carolina in the NCAA West Regional on Sunday, March 25, 2012 at the Edward Jones Dome in St. Louis, Missouri.)

But he didn’t, and what was a classic college basketball game for 37 minutes swung decisively toward KU during the final three. The Jayhawks won 80-67 and will meet Ohio State, a KU victim in Lawrence nearly 3 1/2 months ago, in a national semifinal game Saturday in New Orleans.

Yes, another dome, although Taylor had to ask to make sure.

“Ah, man,” he said when his fear was affirmed. “You know what, man, hopefully that can change in New Orleans. But like I said (Saturday), I’m going to keep shooting it because I got to. I got to make the defense respect that. I got to keep them honest. I’m going to get it to fall. Don’t worry about it.”

Even with the threes not falling, Taylor was great. He made 10 of his 14 shots inside the arc and scored 22 points to go with six rebounds, five assists and five steals.

I’m telling you, Kansas fans, if you have not made your peace with Taylor, you need to do so now.

It was a five-man band playing all the hits — every KU starter scored in double figures and had at least one major contribution that had nothing to do with a point total.

“I don’t know if ‘overachieved’ is ever a true expression,” KU coach Bill Self said. “Because it means you had it in you the whole time. But I will say that this team’s probably played as close to a ceiling as any team I’ve had.”

Self went on, eventually sounding like a coach who had finally accepted that his team has, indeed, overachieved.

“I don’t think you can give 110 percent,” he said. “I think all you can give is a hundred. I do think this team has given as close to 100 as any team that I’ve ever coached.

“It’s just remarkable to me to see those players cutting down the nets out here tonight. Because this would not be the year that anybody would have thought we would do it. It’s a pretty cool feeling.”

The first half of Sunday’s game was a 47-47 standoff. North Carolina shot 63.6 percent, Kansas 56.3. It was a defense-be-damned 20 minutes, but one of the most entertaining halves of the season.

With the game on the line, both teams decided to try a little defense in the second half. Self’s switch to a triangle-and-two in the final eight minutes was one of the deciding factors; North Carolina scored three points during the final 8:33.

“I thought we could really pressure their point guards, (Stilman) White and (Justin) Watts,” Self said. “And we did. We did a great job on them the first half. They had nine points, eight assists and zero turnovers. Unbelievable.”

More attention was paid to clogging the middle in the second half, when North Carolina scored 20 points, shot 22.6 percent and missed all 10 of its three-pointers.

It’s another example of a successful coaching move made by Self, who has had one of his best seasons. Remember, while Kansas was ranked in everybody’s top 15 to start the season, the ranking had to be based more on respect than expectation.

Self has taken a group of players who all had at least one question mark by their name and turned them into one of the last four left.

“I don’t know if I ever enjoyed coaching a team more than this one,” Self said. “I love them. We fight. It’s combative sometimes and all those things. But they have done so much as far as their work habits and representing our school in a way that has just given us a chance.”

Taylor had his big game after sub-par performances against Purdue and North Carolina State.

Big Thomas Robinson had 18 points and nine rebounds and was chosen the Midwest Regional’s MVP.

Junior guard Elijah Johnson, fighting his shot most of the night, made the biggest one of the game, a three-pointer with 3:04 left that gave KU a 71-67 lead in a game that previously had little breathing room.

Seven-foot center Jeff Withey had a huge block of a John Henson shot late, then had the presence of mind to tip the ball ahead to Taylor, who turned it into a three-point play to give KU a 74-67 lead.

And junior Travis Releford had 11 points and did the defensive job of the night on Carolina’s Reggie Bullock, who could have been a real thorn in KU’s side but instead was limited to five points on 2-of-6 shooting.

“I think this would have been a year that if we got to the second weekend (of the NCAA Tournament), most Kansas faithful would be happy,” Self said. “But I don’t think our guys are satisfied or would ever think that. I think they think this is our year and I’m certainly not going to tell them differently.”