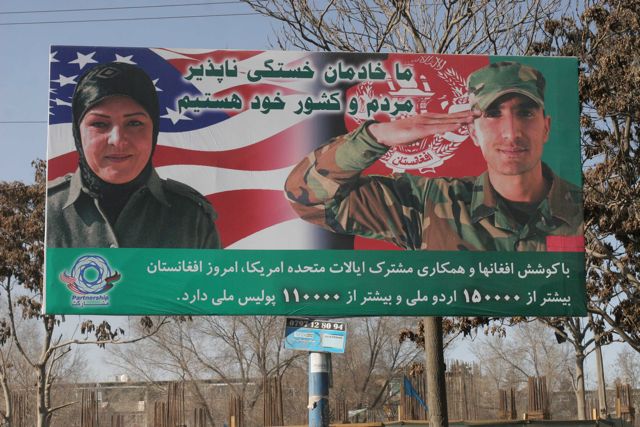 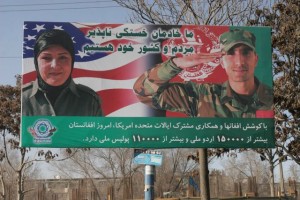 KABUL, Afghanistan — Afghan soldiers and police say the recent burning of Qurans by U.S. personnel has seriously undermined their trust in their American counterparts, suggesting that the decade-long campaign to win hearts and minds has not only failed but also threatens the Obama administration’s exit strategy.

(PHOTO: A billboard for Afghan National Security Forces in Kabul, Afghanistan, says, “We are tireless servants of our people and country,” and, “Through the efforts of Afghans and with the cooperation of the United States of America, Afghanistan today has more than 150,000 national army personnel and more than 110,000 police officers.”)

“We are tired of the Americans here,” said Mohammad Aziz, 20, a Kabul police officer. “We don’t want them to stay because they keep insulting our religion.”

The crisis of confidence has called into question the viability of the U.S.-led mission to have international soldiers and advisers train Afghan forces and hand security responsibilities to them before the end of 2014. The Afghans’ abilities to safeguard their country against Taliban and other threats remain uncertain, and international trainers already have been forced to restrict their contact with Afghans after the violent backlash from the Quran incident.

“It has created a gap between us and the Americans,” said Col. Rozi Khan of the Afghan army’s commando brigade. “There is no trust between us.”

Interviews with more than two dozen Afghan security personnel in recent weeks suggest that mistrust and hostility between the supposed allies has been simmering for years — but boiled over after Feb. 20, when American personnel burned Qurans and other religious materials at the U.S.-run Bagram Air Base north of Kabul.

The incident sparked widespread fury in this conservative Muslim nation and led to public demonstrations and attacks on bases belonging to the U.S.-led coalition. At least 30 Afghans have been killed and more than 100 wounded in the unrest. A Pentagon investigation found five soldiers responsible, but it was unclear whether they would face disciplinary action. Afghan leaders have called for the perpetrators to be tried and punished.

The Quran burnings unleashed pent-up anger from many Afghan soldiers and police who perceive U.S. troops as insensitive to their culture and religion, indicating a relationship in which even relatively minor misunderstandings could cause serious problems. Coalition officials in Afghanistan ordered their forces to undergo additional training on the proper handling of Islamic religious materials.

Several Afghans interviewed voiced frustration at previous incidents of Americans desecrating the Quran. And while they didn’t mention specific cases, the burning last year of a copy of the Muslim holy book by Florida pastor Terry Jones received wide attention in Afghanistan and sparked days of deadly protests nationwide.

“The Quran has been burned by the Americans on several occasions in the past,” said Jamaluddin, a sergeant major interviewed in Kabul who, like many Afghans, uses only one name.

U.S. political and military leaders have stressed that the violence won’t derail the training mission. The coalition said this week that the suggestion that the mission was in serious jeopardy was “a gross exaggeration.”

“It’s business as usual. Nothing has changed,” said a coalition spokeswoman, Lt. Lauren Rago. “We have hundreds of interactions with them every week. There definitely is a sound relationship there.”

But at a news conference Tuesday, President Barack Obama appeared to suggest that the fallout from the Quran burning could lead the U.S. to accelerate its withdrawal from Afghanistan.

“I think that it is an indication of the challenges in that environment, and it’s an indication that now is the time for us to transition,” Obama said.

Muslims believe that the Quran contains the literal words of God, and every Afghan soldier or police officer that McClatchy Newspapers spoke with said they would not hesitate to intervene if they saw anyone desecrating it. Most said they were prepared to use violence.

“If an American burns the Quran in front of my eyes, I will kill him. I don’t care whether I live afterwards or not,” said Jandad, a soldier based at Afghanistan’s Ministry of Defense in Kabul. “My life would be worthless if I saw such a thing and didn’t take action.”