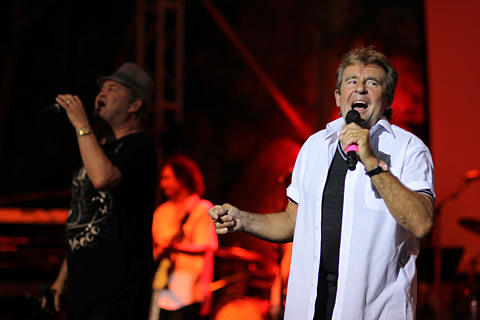 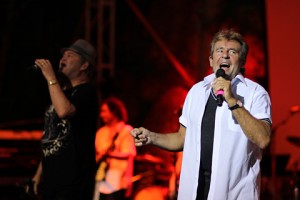 LOS ANGELES — Davy Jones was a promising 18-year-old actor from England when he found himself among the guest performers on “The Ed Sullivan Show” on Feb. 9, 1964 — the same night about 75 million people tuned in to catch the American debut of the Beatles. Like so many others who watched the show from near and far, Jones considered it a life-changing experience.

(PHOTO: Davey Jones sings “I’m a Believer” on July 1, 2011, in Apple Valley, Minnesota. Jones, the British Invasion-era singer who became a household heartthrob as a member of the Monkees, has died in Florida. He was 66.)

Looking on from the wings as hundreds of teenagers, mostly girls, were screaming ecstatically while listening to the four musicians who came from a town only 20 miles away from his own hometown of Manchester, Jones knew then he wanted a career in pop music rather than theater.

A little more than a year later he auditioned for and was accepted as a member of the Monkees, a pop band created for a television show developed in the wake of the success of the Beatles’ “A Hard Day’s Night” film.

The new group’s fame quickly came to rival that of the Fab Four after NBC-TV executives put Jones and bandmates Micky Dolenz, Michael Nesmith and Peter Tork into the living rooms of millions of viewers every Monday night. The show ran from 1966 to 1968.

Jones, who died Wednesday at 66 of a heart attack in Martin County, Fla., was the group’s counterpart to Beatle Paul McCartney as the Monkees’ romantic heartthrob, and his British accent lent the band a dash of international intrigue in songs on which he was the lead singer, including a couple of their biggest hits, “Daydream Believer” and “A Little Bit Me, A Little Bit You.”

“That David has stepped beyond my view causes me the sadness that it does many of you,” Nesmith wrote on his Facebook page on Wednesday. “I will miss him, but I won’t abandon him to mortality. … David’s spirit and soul live well in my heart.”

Although initially dismissed in music circles as a television fantasy more than a musical reality, the Monkees charted nearly two dozen singles during a heyday from 1966 to 1970 and became the first, and only, act to score four No. 1 albums on the Billboard chart in the same calendar year.

“It’s a sad day for me,” said filmmaker Bob Rafelson, co-creator of “The Monkees” with Bert Schneider who also produced their avant-garde 1968 film “Head.” “Of all the films I’ve made that have received attention from the Academy Awards, or Cannes (Film Festival) or the New York Film Critics Awards, nothing ever pleased me more than hearing a (radio) announcer say, ‘Here’s Davy Jones singing “Daydream Believer.” ’ ”

Although never inducted into the Rock and Roll Hall of Fame, the Monkees have long been lauded for the boost they gave many songwriters by recording their compositions, including Neil Diamond, Gerry Goffin and Carole King, Harry Nilsson, Tommy Boyce and Bobby Hart, and John Stewart.

David Thomas Jones was born Dec. 30, 1945, and gained success in his native country as a child actor with roles in different series shown on the BBC. At 11, he had an important role in the long-running soap opera “Coronation Street.” After a successful run on London’s West End as the Artful Dodger in a production of the musical “Oliver!” in his teens, Jones re-created the part on Broadway, landing a Tony Award nomination. It was that production that was highlighted by Sullivan in the same show on which the Beatles appeared for the first time.

He also trained to be a jockey — he stood 5 feet 3 — and his passion for horses stayed with him through his life.

Rafelson said he and Schneider auditioned 437 actors and musicians, including Stephen Stills, David Crosby, the Lovin’ Spoonful and future members of Three Dog Night, before zeroing in on the four who became the Monkees.

Some of the band members’ desire to be taken seriously musically led to notorious power struggles with TV and music publishing executives. But that wasn’t a big concern for Jones.

“Eventually Peter and Mike, especially, wanted to write, play and record … or be behind the camera,” Jones told a Springfield, Mass., newspaper earlier this year while on a solo tour. “But I just wanted to be in the show, fall in love twice in each episode and kiss the girls. I had no ambition to be Steven Spielberg or Cecil B. DeMille.”

Still, Rafelson credited Jones for assuming a vocal role in the group’s efforts to take more control over their music and their careers.

Tork quit the band in 1968 and the Monkees continued briefly as a trio, then disbanded in 1970. Jones promptly resurfaced the following year with a guest appearance as himself in “Getting Davy Jones,” one of the most celebrated episodes of “The Brady Bunch,” in which Marcia Brady launched a campaign to persuade the teen idol to visit her school.

In the ’80s the group had a resurgence sparked by a CD box set issued by the archival label Rhino Records, and that led to then-new MTV showing episodes of the original series that revived interest in the band. They have since done several reunion tours, usually without Nesmith, including a 45th anniversary round of shows last year that was cut short because of differences that cropped up among Jones, Dolenz and Tork.

Although he was comfortable with his highest-profile job, Jones sometimes worried that the Monkees’ legacy would follow him for the rest of his life, which he spent acting in numerous TV shows, theatrical productions, and doing voiceover work for cartoons and animated features.