A dozen ideas to help fix the Academy Awards ceremony 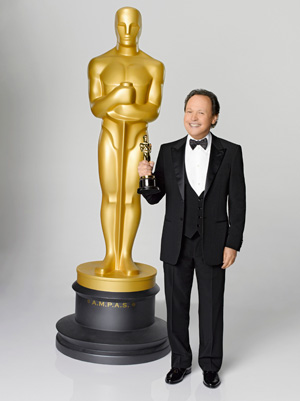 No memorable speeches, sparkling color, suspenseful plot twists or breakneck 21st century pacing. No, that’s not a synopsis of “The Artist,” the delightful French silent film that’s the odds-on favorite to sweep Sunday night’s Academy Awards. It’s a description of recent Oscarcasts themselves, rote affairs in which competition between little-seen contenders played out listlessly for diminishing audiences.

(PHOTO: Billy Crystal serves as host for the 84th Academy Awards, which will be presented on Sunday, February 26, 2012, at the Kodak Theatre in Los Angeles, California.)

The Academy can’t fix this. Expanding the best picture field from five nominees in 2010 actually reduced viewership. Appointing those noted hipsters James Franco and Anne Hathaway as hosts last year drove down viewership in the coveted 18- to 49-year-old demographic by 12 percent. What has long been considered the pinnacle of the year in movies is becoming a non-event.

It’s time to reboot the franchise. Here are a few modest proposals for making the show less about handing out awards and more about entertaining people.

1. End long-winded acceptance speeches with a trapdoor to be triggered after 45 seconds. Mentioning more than two business partners nobody outside the industry has heard of or attributing the win to divine intervention is grounds for an immediate plunge down the hatch. If it’s a team of winners accepting, they still get 45 seconds overall, not 45 seconds apiece. Anyone who remembers to thank the screenwriter gets an extra 10 seconds.

2. Ditch the technical and short film awards. Everybody at home goes to the refrigerator at this point anyway. If you want us to pay attention, give the best sound mixing prize to whoever can run fastest through a maze or something.

3. Death to the death montage. The In Memoriam segment brings the show down and slows the pace to a grinding halt. And it’s crass beyond words when some of the departed get more applause than others. If you’re really missing these people, Hollywood, go to the cemetery with a tasteful floral tribute and bow your head privately. The glitziest displays of grief are the least genuine.

4. Add a segment retroactively revoking an Oscar from somebody who has made consistently wretched movies since winning. Prime candidates: Kevin Costner (“Waterworld”), Robin Williams (“Death to Smoochy”), Halle Berry (“Catwoman”) and Nicolas Cage (everything).

5. Nominate some hits. Time was, many best picture nominees were also bona fide hits. That makes for an engaging awards show, since a popular movie means more fans who may care enough to tune in and root for it. Over the last decade, voters’ preferences have favored artsy indie fare, and viewers have drifted away en masse. From its “Titanic” high of 57 million viewers in 1998, the Oscarscast has dwindled steadily, drawing just 42 million viewers in 2010 and 37 million last year. In each case, that’s 0.028 viewers for every box-office dollar earned by the combined best picture nominees. If that calculus holds true, this Oscar Sunday will attract just 17 million viewers, a ratings disaster.

6. Get a live-wire master of ceremonies. Is there a human being on the face of planet Earth who is excited at the prospect of watching an exhumed Billy Crystal scuttle through a musical number and spout godforsaken Bruce Vilanch one-liners?

7. Include terrible movies on purpose. Not in the best picture competition — we’ve already been through that scenario with “Crash.” Open a new category in which the people who made the most unforgivable films of the year face off for a chance to apologize to moviegoers worldwide. Shouldn’t we hear some contrition from the people who gave us “Jack and Jill” or “Bucky Larson: Born to Be a Star” or “Zookeeper”? Oh wait, those were all Adam Sandler projects …

8. No more opening envelopes. You would think an industry composed of storytellers would know this, but opening envelopes is not dramatic. Instead, make the voting process transparent and pick winners by applause-o-meter. That way we’ll get a sense of how much support there was for the runners-up. And we’ll find out if the nominees who “don’t really believe in competition between artists” applaud for themselves.

9. Rename the best-animated-feature prize the Pixar Award. Just go ahead and do it already.

10. Quit turning the stars into designer mannequins. Take away their stylists. We know from extensive research in Us magazine that left to their own devices, actors dress like complete idiots, or musicians. Stop providing them with conservative outfits in exchange for a red carpet plug, and maybe we’ll see more Bjork-style dead swan gowns. Let’s see Melissa Rivers deal with two hours of “Project Runway” nightmares.

11. Offer rebuttal time to losers. Wouldn’t you like to know what Helen Mirren and Meryl Streep were really thinking when Sandra Bullock won best actress in 2009 for “The Blind Side”?

12. Revamp the acting categories. The Globes break out comic performances from drama. The time has come for the Oscars to level the playing field with one category for actors playing characters with mental or physical impairments and one for everyone else. It’s only fair.