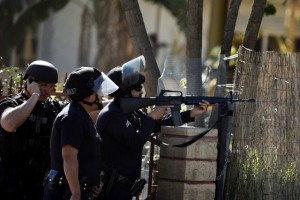 LOS ANGELES — A shooting and fire Thursday afternoon at a house in East Hollywood left two people dead, including the suspected gunman, and three others seriously wounded.

(PHOTO: A Los Angeles police officer keeps his gun drawn on a house in the East Hollywood neighborhood of Los Angeles, California, where three people were shot and one person died inside the home on Thursday, February 16, 2012.)

Authorities said the incident was the result of domestic violence. The wounded, two women and a man, all in their 30s, were all shot in the upper torso. They were hospitalized in serious condition, but officials said all three are expected to survive. All were conscious and able to talk, police said.

Los Angeles Police Lt. Andy Neiman said several police and firefighters put themselves at risk of being shot or injured in the fire to help rescue the three survivors, who were pulled from a front entryway while the fire burned in the back of the house.

After the flames were extinguished, firefighters found two bodies in the home.

About 150 firefighters battled the blaze in the back of the one-story, single-family home for 21/2 hours. Strong winds sent smoke billowing throughout the neighborhood as firefighters sprayed water from the ground and from the roof of the apartment building next door.

By the time the flames were out, Los Angeles Fire Department Capt. Jaime Moore said, the chances of anyone inside having survived were “absolutely zero.”

A SWAT team was prepared to enter the house when the fire was knocked down but stood down after firefighters found the bodies. Police said one was the shooter and the other was believed to be a man but was too badly burned to be identified.

Police did not release the shooting suspect’s or the other peoples’ names. Neiman said the suspect was at one time in a relationship with a woman who lived in the home. She is among the three survivors, he said.

The residents of the home were renters who had moved in about six months ago, landlords James and Brigid Sheridan said. There were five or six people in the six-bedroom house — a married couple in their 30s and others who subleased from them, the landlords said.

The Sheridans did not know the residents well but said they were good tenants. “I had no problem with them at all,” Brigid Sheridan said.

A neighbor, Lizbeth Marroquin, 23, described the home’s residents as pleasant and friendly and said she was baffled by the violence.

Maria Arguello, 60, who lives across the street, said she saw a young man with a ponytail, dressed in black and carrying a duffel bag. He banged on the door of the house, then went inside, she said. Arguello said she heard gunshots shortly after.

Arguello said the house had been occupied by a succession of “young, artistic types” but did not know the current residents.

The neighborhood is largely Latino, and Arguello said it used to be family-friendly but has lately had trouble with drugs.

The area around the home was evacuated, and nearby Harvard Elementary School was briefly put on lockdown because officials believed the gunman could have been on the loose.