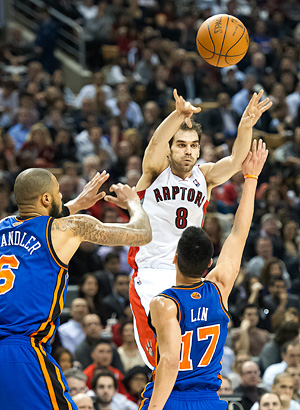 TORONTO — In the final moments, the ball wound up in Jeremy Lin’s hands. Naturally.

An offensive rebound kicked out to him with 20 seconds left and the options were veered through like a computer. A timeout to set up a play? No. The pick-and-roll play that was being shouted from the bench? No. He looked to his coach, and with just five games under his belt, had a request.

“Actually,” Lin said. “I looked back to ask him if I could get an iso.”

Mike D’Antoni wasn’t about to argue with powers bigger than his playbook. So Lin dribbled at the top, waved off the picks and isolated Jose Calderon. He waited patiently until the clock was down to just over two seconds and stopped just outside the three-point arc, where he unleashed a shot that floated toward the rim. If it seemed to hang for an eternity, there was little doubt about the outcome. The ball swished through cleanly with 0.5 seconds left and gave the Knicks another unlikely victory, 90-87, over the Raptors, their sixth straight win.

“There’s no doubt,” Jared Jeffries said after lifting up Lin in his arms as the buzzer sounded. “When it’s a big play, a crucial moment of the game, he’s going to make that play. He’s going to be successful. Right now his confidence is at an all-time high and our confidence in him is just as high.”

Why not? The exchange rate on Linsanity as the Knicks crossed the border was off the charts. The newspapers in Toronto were adorned with front-page stories. The Air Canada Centre was sold out for just the second time this season on Asian Heritage Night and filled with more than 100 media types.

And it seemed as if every one of those fans and maybe some of the media erupted with 1:05 left in the game as the out-of-nowhere phenom drove into the lane and hung in the air, drawing a foul and flipping in a shot for a three-point play to pull the Knicks even for the first time since the first quarter.

The ovations rang out again with the game-winning dagger, and when he ran off the floor after a postgame interview.

The Raptors couldn’t have been blamed for wondering where they were. The address may be Toronto, but they now were in the twilight zone known as Linsanity. When it ended, 20,092 fans prepared to someday tell their grandchildren what they had seen.

D’Antoni, disheveled and exhausted, deadpanned, “I’m just glad it went like this so we could calm the Linsanity down a little bit.”

Asked if he believed what was happening to him, Lin smiled and admitted, “No.”

Lin finished with 27 points and 11 assists. He struggled at times, committing eight turnovers and missing some free throws as the Knicks fought back. But he provided a close-enough facsimile to what he’d done so far to keep the legend growing.

“Tyson and I had a moment,” Amar’e Stoudemire said. “We stared at each other for like three seconds and then we started hugging each other and dancing at halfcourt like we won the championship. I was amazed and am still somewhat amazed by the way he’s playing.”

The questions had been raised in recent days just how the red-hot Knicks would blend their two stars with the overachieving group that had won five straight games. And at the start it seemed as if the worst possible scenarios were taking place.

Stoudemire was back after missing the last four games to be with his family after the death of his brother, Hazell. He struggled with rust, missing his first four shots and five of six in the first period. The Knicks were down by seven after one and trailed by as many as 17 in the second quarter, cutting the lead to 11 at the half with a 6-0 run. Stoudemire came up big in the fourth quarter, though, with six points and five rebounds. But it was Lin who scored 12 — including the final six after an Iman Shumpert steal and dunk brought them within three with 1:28 left.

“The amount of fun we’ve had, it’ s just, you look around, everyone’s smiling,” Lin said. “There’s a new energy. Everyone’s excited. That’s the thing. It’s not because of me. It’s because we’re coming together as a team.”