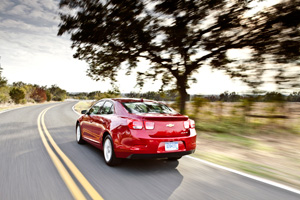 By Larry Printz, The Virginian-Pilot –

When it comes to cars, Americans buy more midsize cars — or D-segment cars in automaker parlance — than any other country. The rest of the world prefers compact C class cars, vehicles that are the size of a Chevrolet Cruze. Not surprisingly, the Cruze is Chevy’s most popular vehicle worldwide. The subcompact Sonic, also sold internationally, is a B class, while the forthcoming Chevy Spark, a microcar, is considered an A class car.

(PHOTO: The redesigned 2013 Chevrolet Malibu trades its American platform for one shared worldwide with other midsize GM cars, such as the Opel Insignia and Buick Regal. It’s Chevrolet’s first global midsize car, one that will be built in four plants worldwide: two in the United States, one in China and one in Korea.)

This creeping internationalization of Chevrolet’s fleet predates GM’s trip into insolvency and rebirth. But the effects are only now being felt. Consider this: 60 percent of Chevy’s sales are now overseas, according to GM.

The redesigned 2013 Chevrolet Malibu should increase that number as it trades its American platform for one shared worldwide with other midsize GM cars, such as the Opel Insignia and Buick Regal. It’s Chevrolet’s first global midsize car, one that will be built in four plants worldwide: two in the United States, one in China and one in Korea.

As a result of its becoming an international citizen, the 2013 Chevrolet Malibu has a 4.5-inch shorter wheelbase than the 2012 Malibu, but is two inches wider. Gone are the 2012 model’s long, flowing lines that imparted a sense of elegance to a nameplate that hadn’t seen sublime styling in decades. The new Malibu has a more pugnacious, muscular stance that seems cautiously conservative next to the more daring 2012 Hyundai Sonata, Kia Optima and the stunning 2013 Ford Fusion.

Initially, the front-wheel-drive Malibu is being offered only in Eco trim, which employs a revised version of GM’s mild hybrid system, which GM calls “eAssist.”

The term refers to a system that uses a 182-horsepower 2.4-liter four-cylinder engine teamed with a 15-hp electric motor-generator and six-speed automatic transmission. The eAssist driveline never runs solely on electricity like a full hybrid. Instead, the electric motor merely aids performance, allowing a lower-powered gas engine and fewer batteries to be used. This improves fuel economy by 12 percent at a lower cost than full hybrids, according to GM.

Like other hybrids, the Eco captures energy during braking to recharge the electric motor’s lithium-ion battery pack. This gives the brakes a grabby feel, although it’s less noticeable than many hybrids. When the car starts to decelerate, fuel is shut off to the engine, which in turn shuts off when the Malibu comes to a stop. The whole driveline restarts once your foot is lifted from the brake pedal.

Chevy engineers took other steps to improve fuel economy by designing the car with aerodynamic underbody panels and by using electronically controlled shutters in the lower grille that close at higher speeds to push air around the car. In addition, lightweight components, such as an aluminum hood, are used throughout the car.

Like the 2012 Malibu, the car’s solid platform and dynamic personality make it a rewarding car to pilot. The new Malibu’s ride is absorbent, insulating passengers from road shocks, yet still communicating that you’re traversing broken pavement. Body motions are well controlled, striking the right balance between bump absorption and a firm ride.

The Malibu Eco feels European in its power delivery. Acceleration off the line isn’t as brisk as it is once the revs build. Throttle response is lively, and the six-speed automatic shifts smoothly. The Malibu Eco’s responsive personality feels like a normal car rather than a miserly hybrid that’s stingy with power, up-shifting too quickly and leaving too little power for passing.

Like other cars of its ilk, the Malibu Eco has low-rolling-resistance tires that, when accelerating through a corner on wet pavement, lose grip quickly, but they prove fine on dry pavement.

Chances to measure fuel economy were limited to preview drives of pre-production models through hills outside of Austin, Texas. Overall, the Malibu, EPA rated at 25 city, 37 highway, clocked in at 27 mpg. That’s superior to regularly aspirated four-cylinder Malibus.

The spacious cabin is as quiet as a college library on Saturday night, with materials that are a clear cut above the outgoing car, not to mention its midsize competition. Looking around the cabin, it’s clear that attention was paid to the finest details throughout the passenger compartment.

The instrument cluster reflects the car’s smartly designed balance of sport and elegance. The gauges are clear and easy to understand, a refreshing departure from its hybrid rivals.

MyLink supports Gracenote, so a song’s album art appears on the system’s 7-inch screen. It also allows you to ask for a Bruce Springsteen track simply by asking for “The Boss.” Thoughtfully, you can customize the buttons on MyLink’s home page, similar to customizing your smartphone. Unlike some automotive infotainment systems, this screen has graphics that are easy to read, and the system is easy to use.

When it comes to trunk space, you’ll find it adequate at 14.3 cubic feet, 2 cubic feet less than other Malibus, thanks to the hybrid components, which take up the remaining space.

Initially, all Malibus will come in Eco trim with “eAssist” driveline. If you’re more of a driving enthusiast, or you want more trunk space, you might want to wait until summer, when you can opt for a 190-hp 2.5-liter four-cylinder engine or a 2.0-liter turbocharged four.

But for those who want comfort, a modicum of driving fun and a fuel-efficient ride at a modest price, the Malibu Eco may fill that perfect spot in your garage.

—As tested: Not available