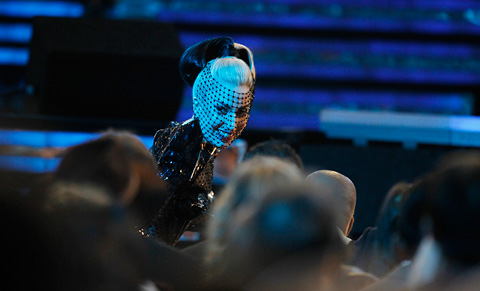 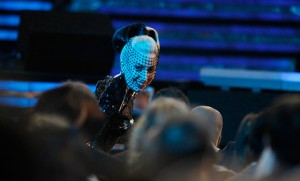 By Dan DeLuca, The Philadelphia Inquirer –

British pop singer Adele dominated the Grammy Awards on Sunday in a ceremony that was transformed into an emotion-packed memorial to Whitney Houston, who died a day earlier, at the age of 48.

(PHOTO: Lady Gaga during the 54th Annual Grammy Awards at the Staples Center in Los Angeles, California, on Sunday, February 12, 2012. )

“We’ve had a death in the family,” host LL Cool J said, after Bruce Springsteen and the E Street Band opened the 54th Grammy show in Los Angeles with their anthemic populist single “We Take Care of Our Own” off the forthcoming “Wrecking Ball.”

The rapper led the crowd in a prayer for the six-time Grammy winner and her family, calling Houston “our fallen sister.”

It was also about Adele, the 23-year-old London powerhouse vocalist who won all six awards for which she was nominated, including album of the year, for “21.”

“This record is inspired by something that is really normal and that everyone has been through,” the singer said in a teary album-of-the-year acceptance speech, “which is a rubbish relationship.”

Adele (last name Atkins), whose album “21” sold more than six million copies (an unheard-of figure today in a world of digital file-sharing), won best song for “Rolling in the Deep,” which she sang in a knockout performance, her first since undergoing vocal surgery in October. The song also won record of the year.

The Foo Fighters, led by Dave Grohl, won five awards, including best rock album for “Wasting Light,” which Grohl, wearing a Slayer T-shirt, proudly pointed out was recorded in his garage with producer Butch Vig, with whom he last worked when Grohl played drums for Nirvana.

Indie-rock easy-listening star Bon Iver won the award for best new artist, as well as alternative album. “When I started making music, I did it for the sheer reward of making songs,” said singer Justin Vernon, who thanked all the acts “who have never been here and will never be here.”

Kanye West, who led with seven nominations, won four awards, including best rap performance for “Otis,” the Otis Redding-sampling single from “Watch the Throne,” his album with Jay-Z. West wasn’t there to pick up his award (Taylor Swift chose not to come on stage and pick it up for him). Swift won two Grammys for her anti-bullying song “Mean.”

“Dreamgirls” star Jennifer Hudson performed a hastily arranged tribute to Houston, singing a touching version of “I Will Always Love You.” Many other performers also paid homage to Houston, including pompadoured pop singer Bruno Mars and Alicia Keys. Keys joined Bonnie Raitt to sing “A Sunday Kind of Love” in tribute to another recent fallen star, the rhythm-and-blues great Etta James, who died last month.

Springsteen, 62, who performed with a string section, was the most energetic classic rocker on stage, but he was far from the only one. The Beach Boys, who will be celebrating their 50th anniversary on tour this year, reunited for the Grammys.

Their segment was marred by unnecessary lead-ins by younger bands Maroon 5 and Foster the People covering Beach Boys songs, but the “Good Vibrations” of Brian Wilson and his long-in-the-tooth bandmates were real.

Rather than trot out his old hits, Paul McCartney — accompanied, oddly, by an orchestra, guitarist Joe Walsh, and pianist Diana Krall — showcased his new song “My Valentine,” while seated on a stool and wearing a tux. John Paul White of the country folk duo the Civil Wars, which won two Grammys, said, “We’d like to thank all of our opening acts, especially that promising kid from Liverpool.” Later, McCartney closed the show by rocking out, with Springsteen and Grohl, with a medley from the second side of the Beatles’ “Abbey Road.”

Seventy-five-year-old Glen Campbell, who suffers from Alzheimer’s disease, also was honored. Campbell, who won a Lifetime Achievement award, sang a spirited “Rhinestone Cowboy” as McCartney and other celebs in the crowd sang along. Other lifetime honorees were the late Gil Scott-Heron, Diana Ross, George Jones, Antonio Carlos Jobim, the Allman Brothers Band and the Memphis Horns.

The great majority of the 78 Grammy awards — down from 109 last year — were given in a pre-telecast ceremony Sunday in Los Angeles.