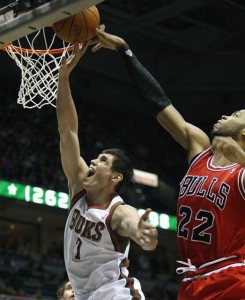 MILWAUKEE — The questions about Luol Deng’s return were flying, and then came another about how the Bulls’ depth distinguishes them. Finally, Scott Skiles had heard enough.

(PHOTO: The Milwaukee Bucks’ Carlos Delfino (10) goes up for a shot against Chicago Bulls’ Luol Deng in the first quarter at the Bradley Center in Milwaukee, Wisconsin, on Saturday, February 4, 2012.)

“Nothing against anybody over there,” the Bucks coach said in his typically blunt manner, “but Derrick Rose distinguishes that team.”

On a Saturday night when Deng returned after missing seven games with a torn ligament in his left wrist, Rose demanded the spotlight yet again in the Bulls’ 113-90 victory over the Bucks.

Blasting out of the gate with 16 points in the first 5 minutes, 53 seconds, Rose thrilled the pro-Bulls crowd at the Bradley Center with 26 points and 13 assists. He has averaged 29.8 points in his last six games.

“He is truly a great player,” Skiles said.

Deng finished with 21 points in 41 minutes, sinking his first three 3-pointers and, other than a wrap, showing few effects from his lingering injury. He also had nine rebounds and finished one fourth-quarter fast break with a dunk, though he did grimace while pushing up off the floor with the wrist after falling.

“I can’t say enough about him,” Bulls coach Tom Thibodeau said. “He stays in great shape. He got out there and did everything, played defense, rebounded, made shots, made us function well as a team. It was very encouraging.”

The Bulls shot 53.3 percent with 31 assists. They tied a season high with 67 first-half points and sank a season-high 14 3-pointers, including four from Kyle Korver, who had 18 points off the bench.

The hot perimeter shooting took attention away from the Bulls attempting just four free throws, which broke the franchise record for fewest attempts. That mark of five had stood since March 13, 1973, against Seattle.

Chants of “MVP” for Rose and “Scal-a-brine” for Brian Scalabrine resonated throughout. By the time Taj Gibson threw down a vicious fourth-quarter dunk over Jon Leuer, the pro-Bulls contingent went nuts.

Rose spent several timeouts and quarter breaks getting stretched out by assistant trainer Jeff Tanaka but overcame whatever stiffness bothered him for his sterling performance.

“Derrick set the tone,” Thibodeau said. “He played with a lot of energy in that first quarter. (The Bucks) had played last night, so we wanted to make sure we did that. Derrick did everything. He made the game simple. He got us easy baskets in transition. Obviously, I was very pleased with that.”

Deng played all but the final 1:35 of the second half, another example of his indispensability in the eyes of Thibodeau.

“The thing about Lu is not only is he a two-way player, but he plays with both units,” Thibodeau said. “And he makes them both function well. We missed him some from that standpoint, but guys responded well. Having the depth we have is a great asset for us.”

Having Rose doesn’t hurt either.