Timberwolves fall to Pacers in a testy affair 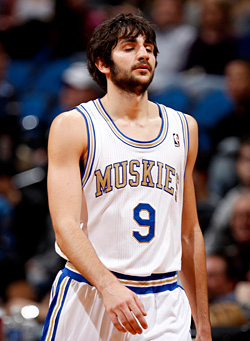 MINNEAPOLIS — The Timberwolves and Pacers went old school on Wednesday night in their throwback attire evocative of a defunct league that once popularized both the three-point shot and the slam dunk, and of a time lost long ago when a really hard foul wasn’t separated into two categories.

(PHOTO: The Minnesota Timberwolves’ Ricky Rubio late in the fourth quarter against the Indiana Pacers at the Target Center in Minneapolis, Minnesota, on Wednesday, February 1, 2012. Indiana topped Minnesota, 109-99, with each squad in throwback uniforms.)

And when it was over and the Pacers had prevailed, 109-99, at Target Center, Wolves forward Kevin Love liked the visitors even less than he did when the evening began with both teams wearing vintage uniforms from the American Basketball Association.

The Pacers denied the Wolves the opportunity to reach .500 for the first time this late in the season — the term “late” is used loosely here — since Dwane Casey coached Kevin Garnett and the Wolves five seasons ago.

Danny Granger scored 29 of his 36 points after halftime, when Indiana simply slugged the Wolves early and often and the Wolves’ only real response was Love’s flailing, frustrated foul on Granger late in the third quarter that caused both coaches to rush onto floor to help save their star players.

“There’s a reason I sprinted out there,” Indiana coach Frank Vogel said. “Did you see what (Granger) did after that point? We wanted him in the game.”

Granger already had scored 15 points in the third quarter alone when Love’s arm whacked him across the shoulders and the head with 23 seconds left.

Love picked up his third foul in a game that seemed to grow more and more chippy as it progressed. Granger received a technical foul for his reaction.

After all the ensuing free throws were shot, the Pacers led 76-68.

By the time Granger fully reacted from the incident, his team led 85-71 after it opened the fourth quarter on a 9-1 run fueled by emotion.

“Kevin Love is a friend of mine, so I’m sure he didn’t do it on purpose,” Granger said. “In the heat of the moment, he gave me a hard foul and that’s how I reacted. You know, it kind of a lit a fire under me.”

They had beaten the Nets at home the night before, traveled and faced a Wolves team that rested Tuesday night after thumping the Rockets in Houston on Monday.

Then they came out and let the Wolves 7-0 after two minutes, 16-7 after five minutes and by 10 points late in the third quarter. Afterward, Wolves coach Rick Adelman lamented his team’s lack of effort as well as offensive movement and “pop.”

“Very disappointed,” Adelman said. “They’re very physical and they took the game right away from us.”

The Pacers took the lead away from the Wolves straight away. Before the night was over, they also had swiped the Wolves’ composure.

The teams played a physical game in Indianapolis last season, a comeback Pacers victory after which Love declared no love lost for the opposition.

“I’ve said all along, I’ve never liked the Pacers,” Love said Wednesday. “You know, they’re so tough. They take those pills and they’ve got all that toughness. They all think they’re tough guys. I just don’t know where that comes from, it just blows my mind. They’re all tough. That makes me laugh.”

It sure looked like it got the Wolves all flustered and flummoxed, even though Love denied it.

“I know that none of them were going to do anything,” Love said about that third-quarter incident. “Just play ball. It’s part of the game. Hard foul. Everybody’s getting fouled out there. They’re silly.

“… They’ve always been a physical team, their place or here. You have to expect that from them. It was a letdown on our part. We just didn’t play.”