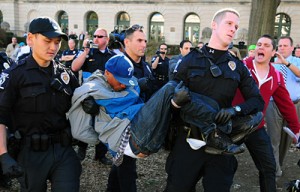 A group of about 30 police officers crossed the street into the protest site at about 2:45 p.m., moments after Capt. Jeff Estes had given Occupy Charlotte’s members “one final warning” to take down their tents and comply with an order he had given for the first time almost eight hours earlier.

Police were acting to comply with a new city ordinance that went into effect at midnight, prohibiting groups from camping on city-owned property.

Amid shouts and the singing of “The Star-Spangled Banner” from Occupy Charlotte participants, police officers pulled down the tents and tossed them into nearby trash trucks. By 3:45 p.m., all of the 30 to 40 tents that had been erected on the lawn of the old City Hall were gone.

Estes said seven people had been arrested on charges of delaying and obstructing officers, a misdemeanor.

Occupy Charlotte made one last attempt to forestall the eviction, going to Mecklenburg Superior Court at 2 p.m. and asking Judge Jesse Caldwell to issue a restraining order against the city. Caldwell said the docket was full and told the protesters’ attorney, Robert Davies, and City Attorney Robert Hagemann that they would have to wait.

Hagemann said the city would not wait. Davies then tried, unsuccessfully, to find another judge to issue the order.

“A bunch of people will get arrested,” Davies said at the time. “We did everything we could.”

His words were proven true just a few minutes later. With police Chief Rodney Monroe watching from the front steps of police headquarters — across the street from the lawn of old City Hall, where Occupy Charlotte has taken up residence since last fall — police massed on the far side of the street.

Meanwhile, Occupy Charlotte members weren’t budging. About 30 tents remained on the lawn, and members of the group stayed inside a few of the tents.

With Occupy Charlotte participants shouting “Shame!” and “Arrest us! We’ll multiply,” police began taking down the tents. Police quickly arrested one person on the grounds — a man who had refused to leave his tent. A second person could be seen taken away in handcuffs minutes later.

Six people, apparently Occupy Charlotte participants, locked legs on the ground and refused to move. Police separated the six and led at least some of the group away in handcuffs.

Some aspects of the event were bizarre, such as the protesters singing the “Hokey Pokey” as police advanced on the tents. One Occupy Charlotte participant ran back and forth across the lawn with an orange tent on his head and an insulting message for police written on the tent. Meanwhile, dozens, if not hundreds, of people in nearby buildings watched the proceedings through office windows and from rooftops.

Davies said later Monday that a hearing on the restraining order has been scheduled before Caldwell on Tuesday afternoon. The goal, he said, is to call for a delay to any further implementation of the demonstration ordinances.

A lawsuit that Davies filed Monday asks a judge to declare that the use of the lawn at Old City Hall is “protected as free speech, assembly, association and the right to petition the government” under the First Amendment and North Carolina Constitution. It further requests a judge to declare that applying the new city ordinances to Occupy Charlotte’s demonstration on the law would violate their rights.

Later, the suit alleges the new ordinances have “already irreparably harmed” the movement. The suit was filed on behalf of Occupy Charlotte and five people who have participated in the movement.